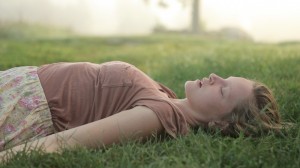 A soft earthquake has been dedicated to Josephine Decker, a young American filmmaker. “Gone Wild”, “Madonna miaviolenta”, “Thou wast mild and lovely”, “Balkan Camp” and “Butter on the latch” are the films she presented at the Turin Film Festival. Her films include Mumblecore elements and magic realism. In fact, Josephine Decker draws inspiration from Joe Swanberg (director of the renowned film “Uncle Kent”), whomshe considers her mentor, and from John Steinbeck and his novels based on an obsessive panic symbiosis.

“Gone Wild” is a celebration of femininity. This short film starts in a typical American kitchen and it has been made for the American band Hips. The main character is a housewife weighed down by boredom and household duty and who succeeds in freeing herself from all those social constrictions that condemn her to a claustrophobic and degrading world. After having killed her demons, the woman finds out to have magic powers and, during a mystical delirium, she becomes a bacchant and joins some angelical entities in a cosmic dance.

“Thou wast mild and lovely”, presented at the last Berlinale, is a dark fairy tale with horror shades and some David Lynch’s oneirism. The story is simple: after having forgotten his wife and son, Akin arrives in a farm in Kentucky, where he is received by Jeremiah and Sarah. Jeremiah is a rude and violent man, while Sarah is a sensual and perverted girl. Among them, there will be a strange relationship that will lead to a massacre.

“Butter on the latch” is more intimate and complex than the others. It’s a timeless sonnet and a thriller that goes beyond our perception. It talks about Sarah and Isolde, two friends. Sarah decides one day to visit Isolde in the forest of Mendocino, California, where there is a Balkan music festival. The relationship between them totters when a man enters their lives. A visionary journey takes place in their minds. Like the others, it is a fascinating film, although its initial budget was lower than 10,000 dollars.

Finally, “Balkan Camp” has a subject similar to that of “Butter on the latch”. It is a sort of documentary about the Balkan music festival that takes place in the forest of Mendocino. But this film revolves around the hilarity and the freshness of the Balkan community.