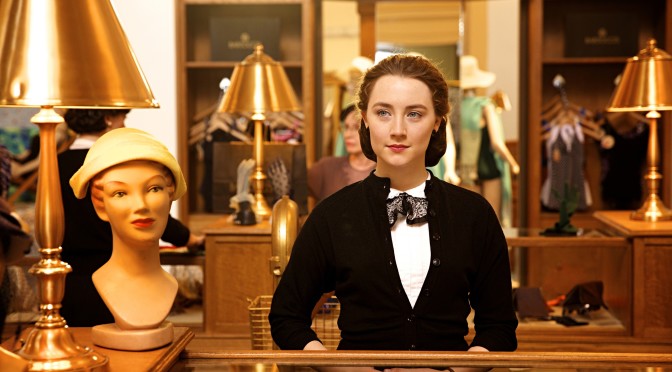 Brooklyn, a drama directed by John Crowley and written by Nick Hornby, based on the novel of the same name by Colm Toìbin. It’s the moving story of Eilis Racey (Saoirse Ronan), a young Irish immigrant who, attracted by the promise of America, departs from Ireland leaving her family and her home to reach the coasts of New York City. The initial chains of homesickness quickly fade away and Eilis lets herself get lost in the intoxicating charm of love. Pretty soon, her liveliness is interrupted by her past, and this young woman will have to make a choice between the two countries and the two lives they involve.

Brooklyn is not the kind of movie that’s surprising because of the originality of its story, on the contrary: we have seen plenty of films with this theme, for instance, The Immigrant by James Gray came out a year ago, starring French actress Marion Cotillard in the lead role. This film had already been presented in Toronto at the Sundance Film Festival, and now here in Turin in the “Festa Mobile” section. It’s certainly one of the best movies we’ve seen so far at the festival, because it’s absolutely touching and beautifully made.

Saoirse Ronan is perfect in her role, the whiteness of her skin and the gentleness of her performance make her the perfect actress to portray Eilis, who deep down is a very frightened, but very brave young woman, and curious to know about the brighter future she has in front of her. The cast includes Emory Cohen who plays Tony, the Italian, and in the role of the “mother” who welcomes and looks after the girls there’s Julie Walters, the famous mother of Ron Weasley, the red-headed character from Harry Potter. A cast with a few stars, Saoirse Ronan is aiming for an Oscar, and the whole film also seems made to go after the golden statue. Indeed, the costumes, the soundtrack and the actors will make of the film a possible nominee and winner of the much sought-after prize.

On the whole, it’s a truly fine work: it’s compelling and full of emotion. Her departure, her sense of abandonment, homesickness, new life, love and happiness. There’s a strong emotional climax that is excellently represented by the protagonist. The most sensitive and romantic viewers will certainly enjoy entering Eilis’s universe and empathising with her character. Ultimately, her insecurities and doubts about the future are pretty much the same ones as any young person could live through. Sometimes the film has too many dead moments, or sections that are too long, like Eilis’s return to Ireland, but these are just personal and subjective impressions, because on the whole this movie cannot receive much criticism.

The film came out in the US on November 5th and in fact it gained pretty high scores from a lot of reviewers, with an average of 8/10.