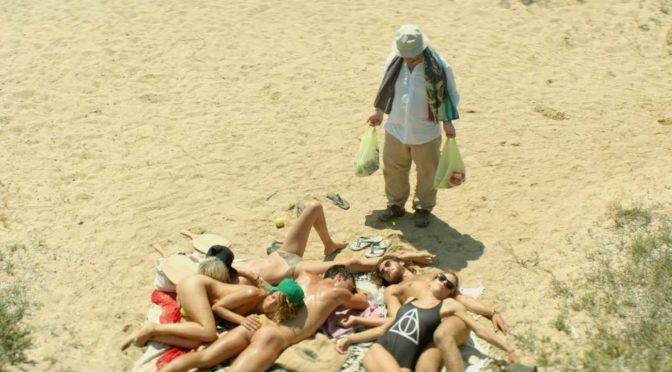 Antiparos Island, at the height of tourist season, is a small oasis made just for youth. The beaches are crowded of young people who live in the moment and enjoy the summer spree. Toned, tanned and naked bodies. Just like Anna’s. The amount of work in town has increased for retailers and for Kostis, the general practitioner, as well. He’s in his fortys, he’s pale and a little overweight. Anna accidentally fell from her moped and as she floods the clinic with her intense sensuality, Kostis falls for her and can’t get her out of his head.

Argyris Papadimitropoulos creates the drama of an almost middle-aged man who is scared to face the future because he wasn’t able to properly live the past. Kostis, who’s paralyzed in an aseptic and monotonous present, sees in Anna’s youth the chance to redeem the years he lost following the wrong projects. He begins to neglect his duties, just to follow the crazy rhythms of the girl and her group of friends; he reveals a new version of himself, which is completely different from his lonely and fragile nature, thinking he can give new stamina to his already crumbling body.The free-spirit charm which distinguishes Anna’s character is so strong that Kostis doesn’t recognize the obviousness of being victim of her narcissistic games. His desire to own and enjoy the vitality of a body in the prime of life becomes an obsession. Therefore, the real victim is actually Anna and Kostis acts as the oppressor.

The milky, hairy and hidden Kostis’s body stands out for his unsuitableness in the golden, smooth and free image of the Greek seashore. The insecurity towards his body arises in the voyeuristic contemplation of nudity around him. Through Papadimitropoulos’s camera the nude acquires an original primitive spontaneity. The body is the epicentre of the earthquake of instincts and repulsions which knocks down everything in its path and leaves behind only the awareness of the time passing and the inevitable transience of the beauty.