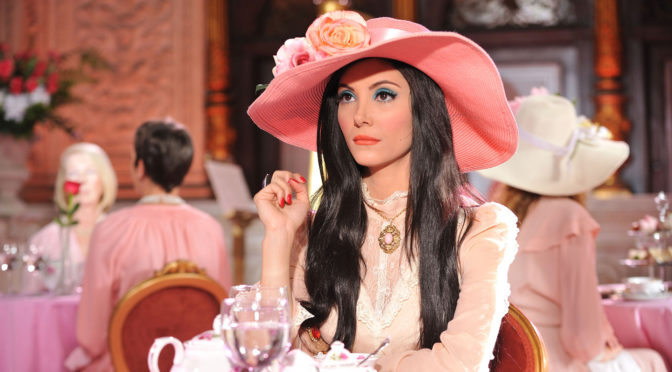 Anna Biller is a director who can also be called “artisan” in every way: she takes care of the direction, the screenplay, costumes, photography, editing and production. For the first time, in this movie she does not appear as actress, choosing as the main character the beautiful Samantha Robinson, who is able to combine sensuality and empathy, which are required to bring to life the figure of a mermaid-witch (a pair that nowadays, as stated by the director, is difficult to portray).

The director, a fan of Pasolini’s cinema, explains her choice for the artisanal dimension with economical justifications and with her will to work along with some traditional and accurate women’s job like weaving and embroidery.

Samantha Robinson portrays the sensual Elaine, the ultimate femme fatale, who has dealt with a great suffering caused by a man and from which she had been able to get over thanks to witchcraft. She wants to find her Prince Charming, but her search will only lead to more tragic facts, until she meets a detective who investigates her. He seems to be the man who will be able to get her to an ideal world, the one she has always dreamt about. This ideal world is perfectly represented in the scene of the medieval feast, in which it is shown everything that the protagonist considers dreamy, but that is impossible to achieve, because of men. In fact, because of their incapacity to love her unconditionally, both physically and spiritually, Elaine decides to possess the detective’s heart in a total, but extreme way, by ripping it out.

The story takes place in Los Angeles suburbs, during the sixties, even though we can notice telephones and cars that are out of tune, since they belong to a later period. Similar anachronisms are evident also in the choice of colors, recalling the old Technicolor.

This is a complex product, planned to the last detail, where it can be noticed the great work of a well-rounded artist.