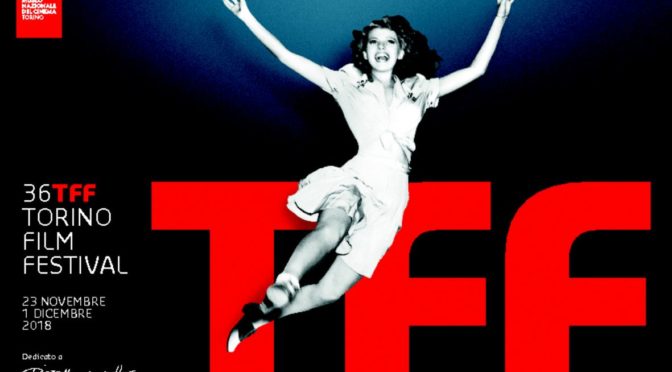 Turin, 13th November 2018. In theatre 3 of Cinema Massimo, Sergio Toffetti and Emanuela Martini inaugurate the 36th Torino Film Festival press conference. Beautiful Rita Hayworth’s dancing body, portrayed in the 1942 film You Were Never Lovelier by William A. Seiter, stands out in the background.

The picture we chose as the official logo for this edition – explains artistic director Martini – adequately represents the spirit of this festival, which has been involved in the research, support and promotion of the most innovative filmmakers in the global cinema industry since 1982. Therefore, freshness, energy and vitality are the keywords that led the curators’ selection.

A total of 178 films will be screened, and it is worthy of note that 36 of them are first or second works. The Turin festival also boasts 34 world previews and 59 Italian previews, which consolidate its centrality and prestige on an international level.

The ideas of renovation and modernity, carried on by the organizers, manifest themselves starting from the composition of the jury, which this year is led by Jia Zhangke, a prominent figure in modern Chinese cinema. He will take on the task with personalities such as Miguel Gomes, Col Needham, Andreas Prochaska and Marta Donzelli. A noteworthy choice is the election of Pupi Avati as guest director. For this edition, he has created the Unforgettables section, a varied anthology of works that explore the meaningful bond between cinema and music, with films such as Clint Eastwood’s Bird, Anthony Mann’s The Glenn Miller Story, and Bix, by Avati himself.

Similarly, the retrospectives will be devoted to the rediscovery of two pillars of modern cinema. On the one hand, we have the creative and visionary flair of The Archers, namely Michael Powell and Emeric Pressburger, who created masterpieces such as The Red Shoes, A Matter of Life and Death and The Life and Death of Colonel Blimp. On the other hand, there lies the extreme, visceral depth of the works of Jean Eustache, the troubled successor of the Nouvelle Vague: with his films, he chased the Bazinian myth of total cinema.

The screening of his 1973 film The Mother and the Whore has been chosen as the occasion to deliver the Torino Grand Prize to Jean-Pierre Léaud, the timeless rebel of Truffaut’s and Godard’s works. The event, during which the actor will meet the audience, will be held at Cinema Massimo on Thursday 29th at 8.15 PM.

The framework of the festival remains the same. Torino 36, the contest devoted to first and second works, hosts 15 films from all over the world, including the Italian Ride, by Valerio Mastandrea. The Onde and Tff.doc sections are curated by Massimo Causo and Davide Oberto, respectively. They are the creative workshops of the festival. In the first one, cinema becomes an ontological machine, the only tool that can save and prove reality (as demonstrated by La flor, the 14-hour-long movie by Argentinian director Mariano Llinàs). In the second one, reality itself is investigated and discovered – this year, in an apocalyptic way – through the forms of documentary cinema.

Lastly, Festa Mobile proves to be the highlight of the festival once again. This section is devoted to the most significant works released in 2018. The two standouts are The Front Runner by Jason Reitman, and Santiago, Italia by Nanni Moretti, which are the opening and closing films of the festival, respectively.

Youthfulness, energy, music and experimentation: these are the strong points of the 36th Torino Film Festival. There is one additional and fundamental element, though: the presence of women. Indeed, the event will host a considerable number of female filmmakers: 27 of them, considering all the sections of the competition.

This year, at the Torino Film Festival, we are in for an explosive dance, an injection of pure energy. All we have to do is wait, hoping that Rita Hayworth’s joyful dance will last as long as possible.