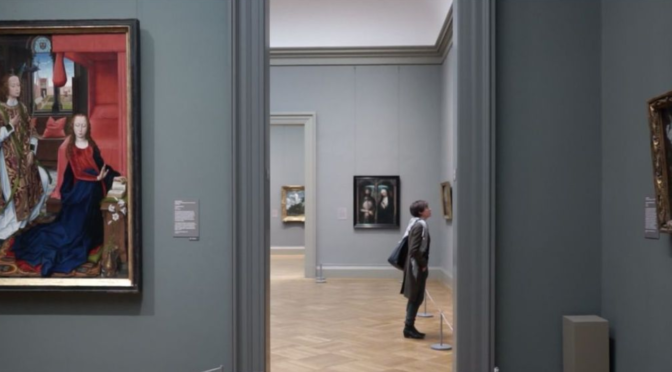 Impetus by Jennifer Alleyn is a hybrid film which combines typical expressive forms of documentary films, such as interviews, with fictional ways of narrating. The final product is a film full of storylines and timeframes that lead to a reflection on action and movement’s relevance and strength.

The events take place in a time period between winter and spring: landscapes go from snow-covered arid ground to blossoming cherry trees in a sunny New York. In this setting the characters do not feel at home, instead they constantly feel as if they were strangers.

The action and the force consist in the ability to make a choice and follow it till the end, but people can act in different ways when asked to make a decision: they can face the situation, or they can run away. Every human action is driven by an inner motion, inexpressible and inexplicable, and the camera tries to reveal what is invisible to the human eye: emotions and how they manifest themselves.

The director, which is also the protagonist (played by Alleyn herself, but also by a man and a woman) tells her viewer that cinema is the only way she is able to forget the pain and the suffering. The only way to fill up the empty space left by the person she loves. The main purpose of Impetus is to remind us that love, hate and the whole range of emotions are prompted by something hidden in human soul, something that is in perpetual motion.

Jennifer Alleyn simplifies this difficult and complex argument on emotions in two ways: she uses an entertaining and pleasant irony but, at the same time, she offers a deep and delicate personal reflection. The strength of these two antipodes leads to a brilliant conclusion: we should not be too attached to people and things, because the fear of loss and the consciousness that everything is destined to end are always hidden in affection.

Is it possible that the answer to the “what is love?” question is to accept the uncertainty and the caducity of things, people and feelings? In this uncertainty, perhaps, the best solution is to forget about it and to surrender to music, movements and brief moments of dance. Helped by music and dance, the protagonist tries to grip an ephemeral, temporary and fleeting happiness in her hands.