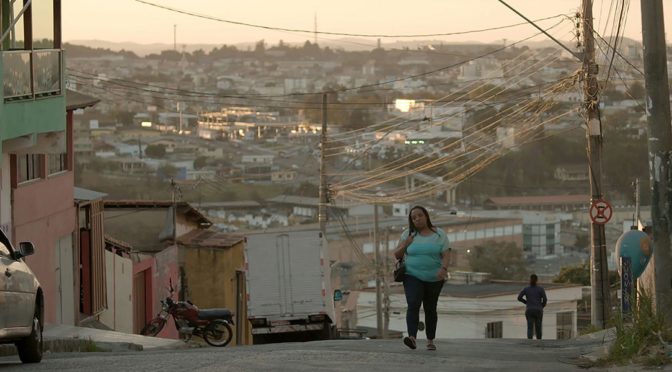 What clear shots this film has, and what natural colours, free from the aesthetical and lighting limitations that some works show. Temporada has a carioca soul, thanks to the vitality and the refinement that the viewer can feel and understand from the first images, while walking the boulevards on the hills of Contagem, a southern metropolis in Brasil, a huge and contradictory country.

The story is set in Contagem, a little area precisely circumscribed by the maps posted in the tiny space of the Department of Public Safety, whose local team is the protagonist of this sober film’s plot. After all, the job of the few characters remains unknown for a big part of the movie. The characters job is not significant for the purposes of the emotional fable that André Novais Oliveira – 34-years-old film director of Temporada – wants to write. The characters occupation reveals the ecological (in the etymological and not merely political sense of the  term) point of view through which Oliveira affectionately describes his homeland. A look that reappears throughout the film, such as in the wonderful voyeuristic scene on the city’s rooftop.

What really counts is the heart of Juliana, the new member of the previously mentioned team, who has just moved from a nearby city and is waiting for her husband to join her. Juliana is played by Grace Passô, one of the best Brasilian theatre actress, who makes here her second appearance on the big screen – and what an appearance! Any award for the best actress in a lead role which has not been assigned to her is an injustice towards her masterful performance.

Juliana is, here, the one who reveals the unreality of the carioca brightness at the beginning of the film: Juliana denies the monolithic alternation of day and night, light and shadow that marks the rhythm of the film and the appearance of real life. The contrasts between light and dark which, hidden or not, coexist in this woman are the same by which the very essence of reality is dominated. Let’s focus on the scene of Juliana’s revelation to her cousin: on the one hand, the darkness of the room adjoining the kitchen, shown in a close-up; on the other, the mild light that illuminates the two women conversing. Juliana’s loquacious and cheerful soul hides an inner darkness of memories and passions, just like Brazil and the world itself do. The lightening of the film is full of contrasts: the ones between day and night and the ones between different lights. The contrast shown in the academic and explicitly expressionist scene in which the mobile phone light, opening a “box of memories”, reflects Juliana’s long shadow in the wall, reveals the conflictual driving force of the film. The same contrast is observed in the sweet yet miserable music of a clarinet that opens and closes the story.

During the press conference, Oliveira said that the camera’s point of view, as already mentioned, is neither political nor anthropologic, but sentimental towards those places (mostly the favelas) who are too frequently represented as stereotyped and empty. One wonders whether the use of overweight bodies, of their physical intercourse and of their noisy and wet kisses, could represent a critic against the very boring rejection of the society and of the public towards them. Anyway, speaking of this scene, another talent of Oliveira’s Temporada is worth mentioning. The scene is set in the house corridor, filmed by a steady-cam through the usual long takes that symbolize the duration of real life. Juliana and her partner kiss. The light seeping in from the door and reflecting on the wall is crooked and oblique and it recreates, through its lines, the same conflict that lives in Juliana’s heart. The character’s inner conflict is also embodied by the diagonal lines of light in the shadow, as well as by the scenographic structure of the scene composition as a whole. This creative, and maybe academic style, may not look coherent with the rest of the narration, but it is enjoyable, interesting and never excessive.

In conclusion, Temporada is a meticulous film, with some inaccuracy in the dialogues, some didactic mannerism, but it is also a respectable, sensitive and simple film. It has the simplicity Calvino talks about in his work Lezioni americane, the talent that some authors have to describe the world without weighing it down, especially when debating about cultural or strong themes. The atmosphere of Temporada is domestic, humble, moral. In the current cinematographic landscape, where form and contents are sometimes unbearably extravagant, this film by Oliveira makes the viewer feel better and it does it well.