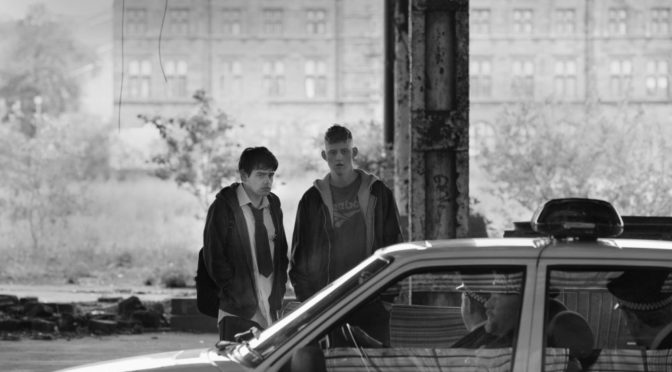 Glasgow, 1994. That’s where the fourth film by the Scottish director Brian Welsh, Beats, takes place. Specifically, during the introduction of the act that banned gatherings of twenty or more people listening to music characterised by the emission of a succession of repetitive beats.

The movie begins in the main character’s respective rooms, Spanner (Lorn Macdonald) and Johnno (Cristian Ortega), who are dancing to the rhythm of the “beats” over the blaring radio. The music is so loud that drowns out the voice on the tv in the background, that is talking about the new law.  The two boys live in the suburbs and are longlife friends, but sadly they are going to split up. Despite their great friendship, they are very different. Spanner has an exuberant personality and is a good person, he spends his days riding an old motorbike, with no destination. He lives with his brother, who is a drug dealer, and this is the reason why everyone on the block thinks Spanner is a lost cause. Everyone believes it, except for shy and introverted Johnno, who works in a supermarket and lives with his mother, his sister and his stepfather. Johnno’s mother wants to move together with her family to a nicer neighbourhood, hoping for a better education and a safer company for her children.

Welsh chooses black and white to shape a suburban landscape rich of contradictions and combines it with a soundtrack whose rhythm perfectly suits the teenagers’ adventures, both aware of the impending separation caused by Johnno’s move. Thanks to the music choices, the director depicts a whole generation. Struggling with police, families and people in the workplace, reflects the deep anxiety about the future, and an urgent need to break free from political and social oppressions.

This is the strategy Spanner adopts to convince Johnno to participate to a secret rave; the first encourages the other to “get out of the cage”, to crown their friendship with one last wild night. Reaching the climax, the camera never forgets to pay attention to their deep affection and shows the party and the drug use through the honest eyes of somebody who has actually experienced this kind of circumstances, at least once in a lifetime. Thus, in the shed where every beat is endless, the boys overcome their fears and achieve an emotional ecstasy, that reveals its highest moment the day after the party, in a sweet final hug between them.