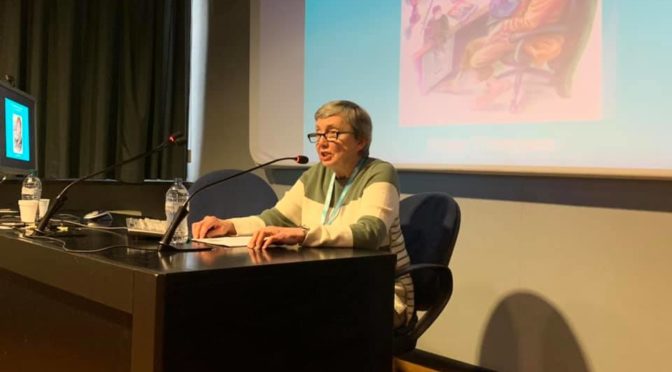 “For further information, see D. Bordwell and K. Thompson”, “see D. Bordwell, K. Thompson”: every film student has found these specific footnotes – or they have heard those two names, or maybe they have studied from their books at least once in their lives. Nevertheless, those distinguished names could still be perceived as far away from reality, they could be considered just as simple names, labels, quotes. That happens to Bazin, Kracauer, Morin, Zavattini, etc. But, on Tuesday, November 26th, David Bordwell and Kristin Thompson gave two lectures to a large group of students at the auditorium “Guido Quazza” of Palazzo Nuovo. Finally, bodies have been associated to their names, the content of a textbook became matter of a dialogue.

Thompson opened the lecture with a speech called “Researching on an on-going event”, concerning her textbook The Frodo Franchise: The Lord of the Rings and Modern Hollywood (University of California Press, 2007). The book focuses on the well-known trilogy of The Lord of the Rings, the impact of digital technologies on the films’ economy, and the adopted marketing and franchising strategies. The public was really involved in the speech, but what surprised the spectators the most was the sense of humor of the lecturer, especially when she shared all the strokes of luck and the downfalls (such as the cease-and-desist letter sent by the production company that was convinced that her work could have put at stake the reputation of the film) that happened between 2003 and 2005, while she was collecting materials for her research. Thompson tells us what it takes to be a cinema researcher almost as a bittersweet joke, underlying how difficult it is for today’s researcher to be heard by this industry, more and more quibbling on the one hand, less and less disposed to dialogue on the other hand.

The speech of David Bordwell (“Geometries of popular narrative”) deals exactly with this matter. Bordwell starts from an essay written by the screenwriter Linda Aronson, concerning the development of storytelling in literature and in the Anglo-American cinema. The lecturer debunks some myths that revolve around Occidental culture with some examples that prove that we can track down some forms of narrative that anticipate the movie montage since the Romantic English literature. Moreover, Bordwell shows that those narrative devices that are considered to be born during the modern era of the cinema (whose forerunner is Citizen Kane by Orson Welles) had been already employed in the American cinema of the 20’s and 30’s. In other words, Bordwell provides a reassessment of the history of narration in order to prove that everything that is modern always has a bond with what is ancient.

After some students’ questions, the event was over. A brief chat with the two authors, maybe an autograph or two, and all came back to normal: the researcher is a researcher again and the student is a student again. But now, both of them feel enriched by the beauty of their dialogue.