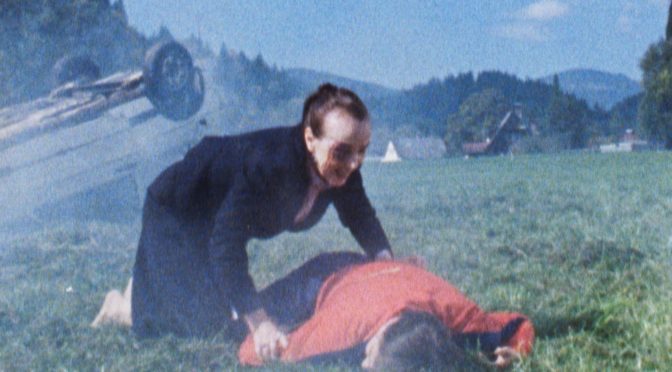 The Alpenrose is the typical Styrian guesthouse where you can taste local food and beer in a traditional atmosphere. The waitress, who is also the owner of the place, is not satisfied with her life even though her husband, a Styrian cook, tries to give her some comfort while tenderizing some meat by using his bare hands. He is also watched by a stuffed groundhog which is obviuosly Styrian as well.

In the meantime, people are eating and laughing in the dining room and in the backyard. Young people are dancing, while elderly people are flirting. There is only one person, a mother, who is complaining to her daughter about everything, including her steak that, according to her, is raw. A joyful chaos reigns at the restaurant, where suddenly a foreign family walks in. They don’t speak German and the waitress can barely speak English. They say they are hungry and want to taste Syrian cuisine, as they have read on the poster outside the restaurant. Thus, a simple reading mistake launches a zombie invasion.

That is how Kelly Copper and Pavol Liška begin their movie Die Kinder Der Toten. The film is beyond surreal since it is based on a novel that the directors have not read at all. While introducing their film, they say they did not want to do a show for the audience but with the audience. Indeed, the cast consists of local non-professionals actors who have been involved only for a short time when shooting the film, and that is why the filmmakers constantly had to change their plans.

It is not easy to describe this movie. It has been filmed in color despite being presented as a 1920s silent film, characterized by ironic title cards and live sounds (even if piano music has been replaced here by Styrian brass and woodwinds).

Die Kinder Der Toten is a parody film, a B-movie that makes fun of any stereotypes, genres, and clichés with disrespectful tones without offending anyone. All themes are involved – zombies, personality disorders, Holocaust-related existential problems, and epic poems written by unusual ethnic groups.

Light but rough on the audience, who is never teased, this movie will make you laugh when you least expect it.