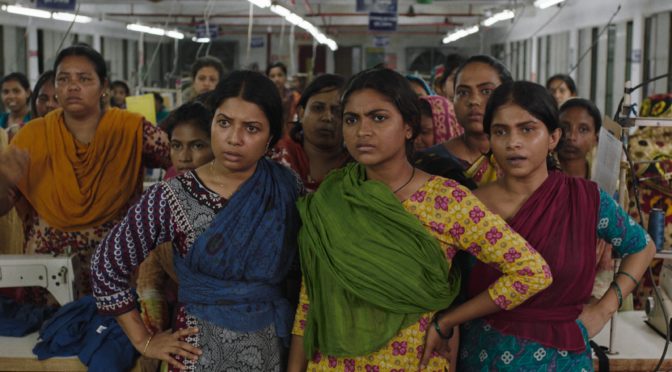 Made in Bangladesh, just like the labels we find on our clothes: from the first frames, the film focuses on the harsh working conditions under which the women who produce them are subjected, in overcrowded rooms and without security measures. The leading character Shimu (Rikita Nandini Shimu), after the death of a colleague in a factory fire, fights against these conditions and begins to collaborate with a journalist to start a union that protects women workers (all women, because they are considered more easily manageable and they are paid less than men).

The film is set in Dhaka, where in 2013 the collapse of an eight-storey building and the death of over 1000 workers had brought international attention to fast fashion and the reality behind the competitive prices offered by the major clothing brands; two years after this tragedy it has been produced a documentary called The True Cost (Andrew Morgan, 2015), focusing on the environmental impact and the human toll of this industry. Made in Bangladesh goes a step further by focusing its attention on the condition of women in Bangladesh society: even though they are more emancipated compared to the past, which today allows them to work and maintain themselves autonomously, these women are in fact still strongly subjected to male authority. Shimu’s defiance (extended to her own marriage when her husband refuses to support her in this project), the manifestation of the positive effects of sisterhood and the emphasis on the importance of education in the fight for their rights make the film a shout of insurrection.

Through an effective stylistic simplicity, the film focuses audience’s attention on the female workers and on their struggle to demand overtime pay and increased security measures. On her third feature film, realized thanks to the support of the Torino Film Lab, the director Rubaiyat Hossain has made a film of great strength and hope led by a main character that contains within herself the numerous workers in the same condition; an important piece of work to make us think and bring awareness on the subject.