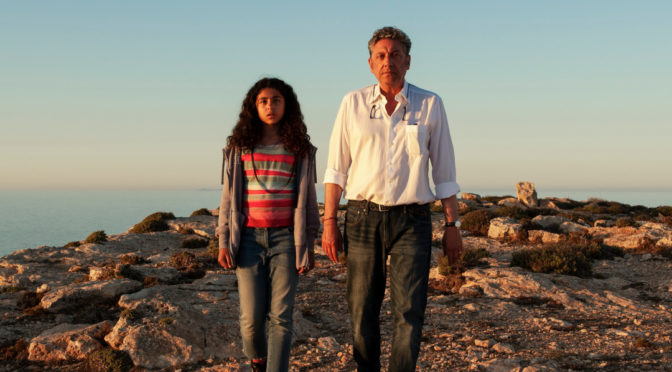 Does it make sense, especially in this time, to make a film about a phenomenon as complex and controversial as migration? According to the director Maurizio Zaccaro, it does, as long as you are aware that what you are telling is a universal story.

The film is freely based on one of the tales included in the book Le stelle di Lampedusa (lit. The Stars of Lampedusa) by Pietro Bartolo. Nour (Linda Msrey) is a Syrian girl who arrives on the island, “the gateway to Europe”, aboard one of the many barges reaching the coast every day. Dr. Pietro Bartolo (Sergio Castellitto), doctor and director of the general hospital, decides to help her find her mother from whom she was separated before starting her journey across the Mediterranean.

Zaccaro’s work has a strong realistic touch. At times it appears to be a documentary, with clear references to Fuocoammare (2016) by Gianfranco Rosi. The major component of the direction is the insistent, almost obsessive use of close-ups. The faces are a medium to remind viewers that those who leave their homes and arrive in Lampedusa after a long journey on barges are not numbers, but people who have a name, a face and a story, like any other human being. It’s the same for the dead captured on camera without any filters.

Monica Zapelli’s screenplay alternates strong and moving moments that hit you in the gut. Nour does not simply tell a story but it makes the viewers feel engaged with it.

Sergio Castellitto, with an intense and convincing performance, plays a character who always put others first, even though this can compromise his own personal relationships. At the press conference, Dr. Bartolo uttered a sentence that best describe the character: “I’m a doctor, not a hero. Saving people should be a duty, not a heroic act”.

Nour is bittersweet, and for this reason it looks very convincing. The film talks about a phenomenon of our time by merely displaying the facts as they are, without asking questions that no one would be able to answer comprehensively. It tells the story of a journey: archetypical and old as mankind. A story that will probably never end, but it will change its characters.