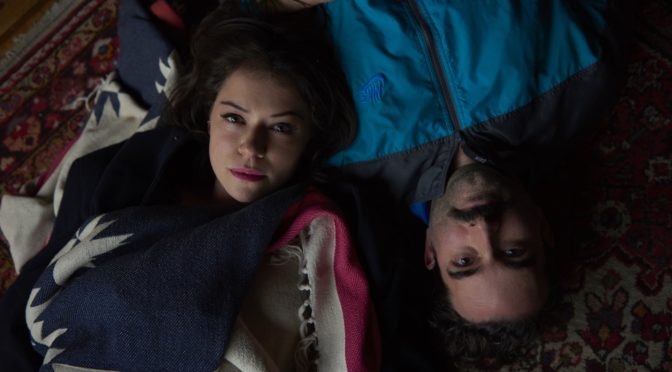 Jenna (Tatiana Maslany) and Leon (Jay Duplass) met in college; he wants to be a photographer, she hasn’t made up her mind yet, although Leon believes that she has a promising career as a producer ahead of her.

Jenna and Leon are in a loving, committed relationship; they have been together for six years when they finally notice the wall dividing them.

Pink Wall recounts the sort of everyday drama that sooner or later we all come to face. Jenna and Leon’s love story, like many others, starts as a casual flingin a crowded club and, over time, their relationship slowly begins to crumble. Ultimately, Pink Wall is about the kind of relationships which end up changing you so much that you can barely recognise yourself.

Tom Cullen’s debut film is a delicate and melancholy story; its only flaw is, perhaps, the lack of that certain “spark” which makes each and every relationship unique. Jenna and Leon’s love story is told in six episodes, one for each year they spent together. The plot follows a non-linear pattern, presenting each scene out of chronological order and encouraging the viewer to put together the pieces that make up the puzzle of their drawn-out break-up.

Cullen adopts the couple’s own perspective, using close-up shots and cramped yet intimate settings. Jenna and Leon are essentially the only characters; other people are reduced to mere background noise (except perhaps for Jenna’s best friend). As for Jenna and Leon, they certainly are an unlikely pair, perhaps an attempt at depicting the typical couple of the new millennium: she is spunky and resolute, while he seems to be too fragile to cope, which causes their clumsy attempts at asserting their respective roles in the relationship to go awry.

Pink Wall is at its core a delicate portrait of two ultimately flawed people whose weakness turns them into shadows, mere silhouettes behind a pink wall which marks the end of it all.