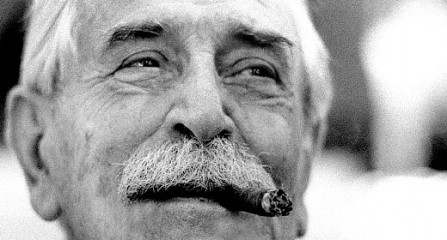 Mario Soldati was an all-round author, a cultured man who has dedicated himself to literature, cinema, television and journalism. He has been the writer and the director of his own life. Born in Turin in 1906, he died in 1999 and, on the twentieth anniversary of his death, we’re talking about him again. Who was Mario Soldati? Why do we keep talking about him? Do we keep on making the same mistake of underestimating him?

These were the two most asked questions in the two days of the 37° Torino Film Festival dedicated to him. On November 25th, some of his long career works were screened at the Cinema Massimo’s theatre named after him, while the following day the University of Turin organized a convention titled: “Mario Soldati: cinema, letteratura e dintorni” (“Mario Soldati. Cinema, Literature, and others”), where numerous experts presented the character’s many faces.

Nevertheless, “character” is the most suited word to describe Mario Soldati: during these days he was addressed as the autofiction’s forerunner, which is extremely popular nowadays. Soldati loved to show different sides of himself, using different masks that contributed to make him look more unique and recognizable. This also reflects on his literary works that turned out to be original, eclectic, bold, and vaguely autobiographic – thanks to the little sparkle of truth hidden in the universal game of his fiction. Contemporary critics didn’t understand him because they couldn’t put him in a box. His directing career split between highbrow and lowbrow culture, between meticulously curated adaptations of literary works and sophisticated comedies, letting himself being inspired by various sources while always keeping his personal style intact. He found in television the ideal expression tool and used it to create a new opportunity to show Italy’s locations, traditions, passions, and social differences.

As the last two days have shown, despite his consistent inheritance, there is still a lot to be discovered about Soldati’s universe. Soldati’s peculiarity relies exactly on his funny way of escaping cataloguing, and his uniqueness shows a new vision on a human, playful, and meaningful world. The Festival’s highlight has the purpose of stimulating a new detailed study of his work in order to enhance it. The hope is to finally find Mario Soldati’s role in the Italian cultural history.

Followed by a round table moderated by Emiliano Morreale, with the contribution of Sergio Toffetti and Paolo Mereghetti.