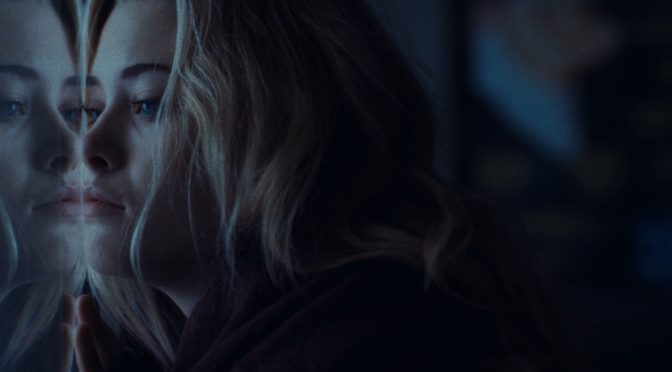 When you lose someone you care about, you feel lonely and the only person who can understand your pain is you. Besides the drama of losing her best friend Grace (Christina Masterson), Aubrey (Virginia Gardner) feels bad for not being there for her when she needed her the most. That is why, after her friend’s funeral, she decides to break into Grace’s apartment and spend the night there. The next morning, she wakes up and finds out that the entire town is strangely silent and empty. There are some abandoned suitcases, scrap metal and blood on the snowy streets.

Aubrey is attacked by a creature and takes refuge in the house where she gets help from a voice on the radio that sends the creature away. The voice says that world population is in danger of an alien invasion. Grace knew something was going to happen, and now only Aubrey can dig and save the world.

She finds out that Grace has recorded and hidden seven cassette tapes, as a sort of last will and testament, where she explains how to save the world. Once collected, the cassette tapes reveal a secret message: “forgive and forget”. And that is what Aubrey does. She needs to reproduce the signal on the radio in order to get rid of aliens. Then a new voice tries to warn her: “You didn’t close the portal. You opened it”. Aubrey knows what to do – she gets inside the energy dome and begins a metaphysical journey to relieve herself of her guilt feelings. Throughout this journey the filmmaker plays with black and white, light effects and amateur shooting images.

Starfish is A.T. White’s directorial debut. The movie is a mixture of genres and styles (ranging from amateur shooting images to animation), but it is slightly flawed. In this sense, it draws inspiration from other popular sci-fi movies (for example, the alien looks like the Xenomorph, the fictional extraterrestrial species in the film Alien) and mentions other narrative sources which appear confusing, as in the case of the metacinematic scene where Aubrey ends up in a movie set, and that movie is called Starfish.

It is not easy to get the deep meaning of this film since there are lots of possible interpretations. It can be seen as a metaphor that embodies guilt in a dangerous alien creature who is capable of murder. The character of Aubrey needs to forgive herself in order to defeat the enemy and move on with her life.