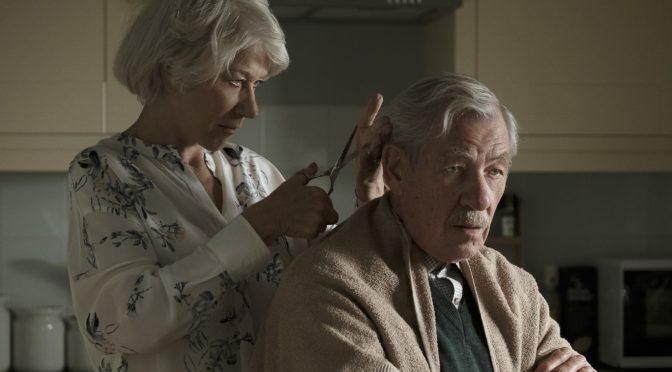 In 2015 Bill Condon obtained a good success with Mr Holmes, a film inspired by Mitch Cullin’s book. Today Condon grapples with a new film based on Nicholas Searle homonymus’s novel, The Good Liar. The two main actors are Helen Mirren and Ian McKellen who play together for the first time on the big screen.

The title clarifies the topic around which the whole story develops. In fact, during the opening credits, the audience can see the two main characters interacting with each other through a dating website.  Immediately the two people reveal themselves to be two liars. Roy Courtney (McKellen) says he’s not a smoker but in the mean time he’s smoking a cigarette and same Betty McLeish (Mirren) that claims she’s teetotal while she’s drinking a glass of wine. During the film, these little lies turn into a escalation of untruths.

Since the beginning, the story is told from Roy’s point of view who is both a very talented crook and a experienced liar. His real intention is sneaking into Ketty’s boring and suburban lifestyle in order to cheat her, to celebrate a life full of frauds and then to live a luxurious retirement. So Ms. Mc Leish seems to be the perfect victim: alone, sick and open. But it’s precisely here that the deceit begins.

The long-lasting collaboration between the US director and the Shakespearean actor reaches, with this film, a perfect balance in which Condon’s directing skills enhances McKellen’s acting. Even Mirren’s performance is worth mentioning: her cold looks and harsh expressions are little but important clues that help the audience to realize who is behind this perfect deceit. Condon uses a clear direction both to highlight the talent of the two actors and to entertain the audience with a complicate game in which it becomes harder and harder to separate reality from fiction and truth from dishonesty.

This is a story of truth and deceit, but – especially – a story of revenge, which always redefines the relationship between victim and victimizer. This relationship refers not only to the home enviroment but even to a universal historical background. Indeed – thanks to two flashbacks – the director brings the two protagonist back to their past, in a nazi Germany before and afer the war. This painful past will play an important role for the final plot twist.

The Good Liar is an intimate drama that interchanges irony and violence. It isn’t a thriller based on suspance, but rather on both the intellectual fight between Betty and Roy and between Mirren and McKellen. In many cases this fight takes over the script and the direction.  For this reason this film can result not so brilliant and, in many cases, predictable. Actually, as Betty reminds in the very last scene, we have to be very careful because “its deeper than what it seems”.