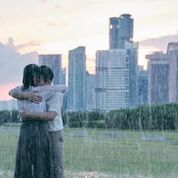 Wet Season is the second work by Anthony Chen, a Malaysian director who already won the Camera d’Or in Cannes in 2012 with Ilo Ilo. It is the monsoon season in Malaysia, and rains don’t want to stop. There are bodies of water that reflect and amplify the state of mind of the characters who populate this film.

Ling (Yann Yann Leo) is a Chinese Mandarin teacher in a boarding school where students have difficulties in writing in Chinese. They, on the contrary, privilege English as most of the affluent population they represent. The only one who demonstrates kindness in respect of the teacher is Weilun (Jia Ler Koh), but he faces failing: he is interested in the subject not for a cultural growth, but because he wants to spend some time with Mrs Ling, who pays particular attention to him. Ling lives in a difficult familiar context, she has to take care of her disabled father-in-law and of a husband that repudiates her since she is a barren woman. Maybe the impossibility of having a child leads her to give particular attention to her student. He represents her intimate possibility to devote oneself to someone, especially after her father-in-law’s death.

In Singapore the weather is warm over the whole year and the rainy season is an event, it is a time of change and the game of mirrors continues. The protagonists change too: Weilun is a teenager full of desires, while Ling sees a change in the possibility of embracing the freedom that she finds in the innocence of her student. Soon, the relationship between them becomes ambiguous, they find their intimacy in places sheltered from rain – this is a metaphor of the outside world from which they want to alienate. This relation between outside and inside represents one of the directorial keys of the film, and it forces the audience to a guided point of view which is never free to encompass the panoramic of the frame.

Water is always present and, even if it is often only hinted, it covers almost the entire sound of the movie. Despite water appears so fragile and delicate, it hides an unstoppable force that allows it to insinuate in any cracks. Ling and Weilun risk to drown: they need a farewell. At the end of the film, they are under the rain, and for the first time their relationship is sublimated in a sincere embrace, without ulterior motive. This is the last time they see each other, and it is also the last rain. This is no time for a change… the Wet Season is over.