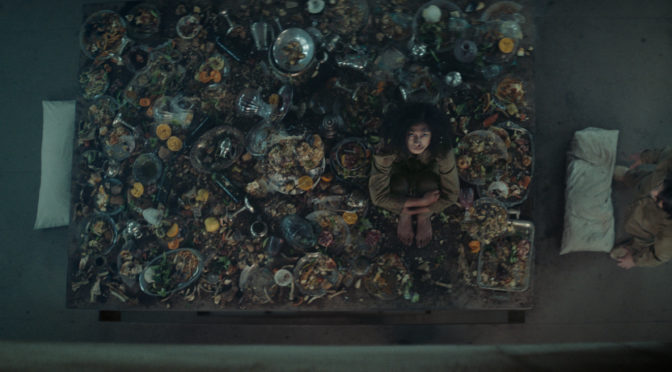 Remember, my dear Sancho, who has more needs to do more.

I totally agree. I just wish Quijote could explain that to hoyo’s “guests”.

But Goreng (Ivan Massagué) knows it well, in fact he chose to take Cervantes’ book with him. He shares the Tower’s 48th floor room with the old Trimagasi (Zorion Eguileor), but every month they wake up on a different floor. Apparently, only who is on the highest floor have access to food, while people on the lower floors have to feed on the leftovers, and the poor devils at the bottom are forced to cannibalism in order to survive – or, even worse, to commit suicide due to the lack of food. Still, the number of these levels remains unknown.

Among the sterile grey walls of the cells, men are turned into beasts and are deprived of any sparkle of humanity. But, if everyone thinks about his own survival, does the human race have any hope left?

So many insights are hidden in this first work: from the quoted Don Quijote, whose morals and iconographical aspect liv in Goreng, to the in medias res structure of the Saw’s saga. Then again, Natali’s The Cube scenography, and The Dumb Waiter‘s Pinter irrational and illogical dialogues.

Galder Gaztelu-Urrutia brings us a political and “genre” first work, that appears to be a critique to the current political models as well as those from the past. A critique both towards the individualism of the capitalist society – which takes advantage of the inherent selfishness of human beings in order to trap them into a profoundly corrupted system in which no fair distribution of wealth is possible – and towards socialism, with its forceful and brutal redistribution of resources.

Galder’s approach is rigorous, as confirmed by the director himself at the press conference: “I’ve put a lot of thought in this film; I meticulously planned every detail, even though at first glance everything appears to be very spontaneous and natural. It is the result of a minutely planned 1000-pages storyboard”. The true innovation presented by the Basque director is how he was able to take a minimal and strictly functional cell and turn it into a more dynamic and rhythmic environment by using a tight editing. Also, he directed the actors in what was a constantly changing room on the diegetic level, but that actually remained the same – thanks to the exploitation of some splatter and action movie’s clichés, and to several mutilations and stabbings.

In the end, the director hides a message about generosity, and how important it is to help other people, no matter who they are.