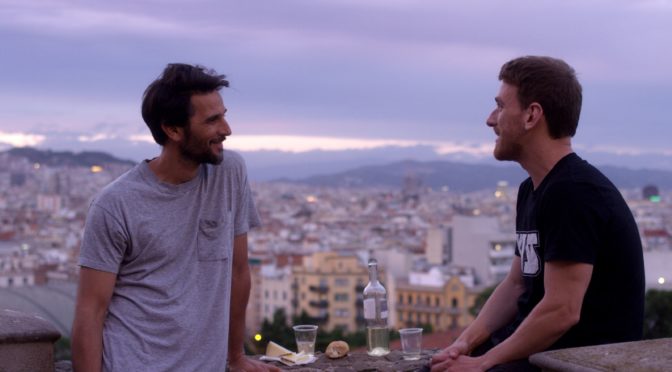 The end of the century mentioned in the title of Lucio Castro’s work is an uncertain end, a feeling of uncertainty that manages to craft a simple and delicate story about the encounter of two souls that discover each other all over again.

It is a warm, quiet Spanish night, Ocho (Juan Barberini) is spending his vacation in Barcelona, exploring and taking pictures. When he gets back to his apartment, he sees Javi (Ramon Pujol) from the balcony and invites him upstairs, where the physical attraction between the two takes over. A sudden spark of passion, that seems to be meaningless. But Castro revolves things around, he brings us back in time and makes us realise that the fling between the two men is actually the story of a universal love, not bound to any space or time.

The story develops along three narrative lines, corresponding to the past, the present and the future, which appear to be extremely uncertain. “I feel like we might have already met”, says Ocho to Javi, just before the story unravels that the two had in fact met twenty years before, when they had a one night stand. Some diegetic elements bring together the several time jumps: a shirt, the sentimental struggles and youth’s dreams that vanish when we find them. Alongside the past where they first met, the idea of a future together takes place, the idea of a family living an ordinary life only to end with an illusion of a new beginning on that balcony, exactly where it all started.

The relationship between Ocho and Javi is elusive, it is very real in the moments spent together but at the same time confusing with its vagueness in time and space: that keeps us from orienting ourselves. The present time is not what really counts in a relationship, as we are used to think; the film deals with memory, immersed in the present of the two young boys that really love each other for what they really are. Their love is independent from their past, that seems to be more and more fleeting.

Castro’s style is really abstract, both in the contents and in the form. He proceeds by removing elements surrounding the protagonists (such as the scene and the direction) in order to isolate them and to depict them as the only relevant elements in the urban set. He successfully challenges the public by not giving any sign of the passing time to the protagonists: the spectators are encouraged to find some clues by themselves.

Fin de siglo speaks to us all. Ocho and Javi’s experience is dismembered and becomes a mental perception of oneself and the other, transforming the most intimal essence of a human relationship into an alive memory of an individual journey that is past, present and future.