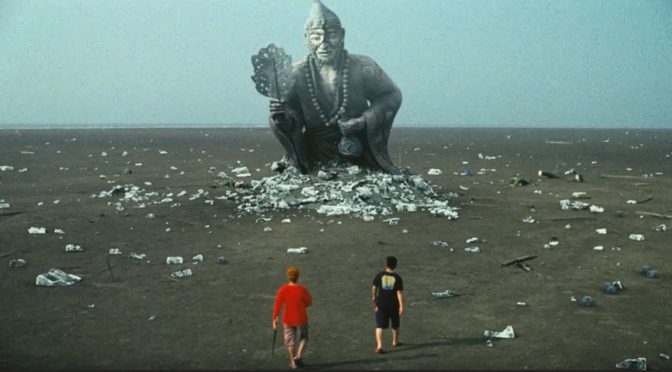 Ohong Village, director’s debut film, is the intimate portrayal of the everyday life of a Taiwanese family. Due to its detailed development, understated technique, hasty images and story editing, it seems to be more of a documentary than a feature movie.

It talks about a highly skilled and extremely clever boy who has just got back home to Taiwan, to his family and his longlife friend. It talks about lies, about (weak) symbols, and about incredibly powerful and emotional sounds.

The audience can clearly perceive the intrusion of the young director’s memories in the several autobiographical elements. Nevertheless, the damaged relationship between the main character Sheng-Ji (Yu-Hsu Lin) and his father (Jieh-Wen King) lacks depth and almost reveals a fairly superficial inspection. As just said, the director takes a leaf from his life: Lungyin Lim had left his home to fly to the European Prague to attend a film school, but once there he heavily feels the separation from his homeland. He pours this sorrow in the images that, in fact, overflows with the anxieties about having lost the way home. Lim is a member of the lower class, thus he belongs to that multitude of young people “grown up thinking of an effective way to improve their own status in the social hierarchy” – as Raffaele Alberto Ventura writes in his Teoria – and through this movie he shows that living abroad is as hard and painful as living in his own native country. When Sheng-Ji goes back home, he tells his family how easy is to make a lot of money in foreign countries, that he himself does earns a lot of money, and that he lives, as he says, “a damn good life”. But nothing is true: he is lying because he doesn’t want to show his huge failure. His father is the only one who doesn’t believe him: that’s the moment in which the plot stars to collapse. Meanwhile, on the background, carnival is coming, and everyone is busy making traditional arrangements. The atmosphere fills up with bright colours and pleonastic oracles.

An intense emotion depicts the static resigned village where daily routines count more than history does. It’s thanks to the family oyster farm and to the family dinner that we discover the intimate poetry of a world totally indifferent to the flowing of the time. And that is also what goes wrong with the film: the only detailed analysis carried out in it looks like a documentary about a Taiwanese family job. The many hidden threads running through the film get lost on the way, because of director’s inexperience, still unable to control the subject.  Characters, objects and storylines are shown and immediately left undeveloped. “There is maybe something behind there” say twice the two friends, but actually there is not, exactly like in the film itself. It perfectly shapes the everyday life of a proud and dejected village, and nothing more. Dialogs, actors and subplots hint at some kind of depth never explored during the whole story – What Sheng does in Cina? How does he live? What about the boy’s friendship?

Ohong Village is a 16 mm film (“This is the way I learnt to work in Praga” explains the director during the press conference), feature that helps to transmit the stillness of time and traditions. It has several weaknesses but also some qualities, first of all, the soundtrack (by Vojtech Zavadil) perfectly matched with the second one, the long shots that frame the scene from the sea to the resigned humanity of everyday life.