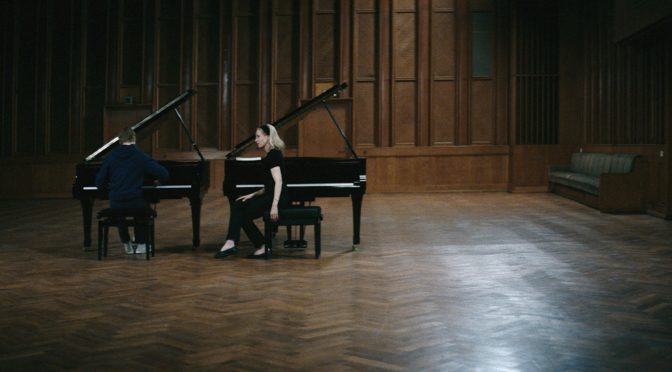 Director Sabrina Sarabi’s first feature film, in competition at Torino Film Festival, on the surface seems to belong to the traditional coming-of-age films.

David (Louis Hofmann) is a young pianist, who studies at a prestigious music academy tutored by cold and strict Professor Matussek (Ursina Lardi). In order to achieve his dream and be accepted into The Juilliard School, he spends up to eight hours a day practicing without rest. When he meets Walter (Johannes Nussbaum) and Marie (Liv Lisa Fries), a couple with whom he soon after forms an uncommon friendship, his already fragile mental state gets affected. After stealing his friend’s girlfriend, David gets romantically involved with Marie, however, he devotes himself to piano only, and his lack of commitment to their love story causes it to come to an end abruptly.

Rehearsing slowly becomes a dangerously bigger obsession. The protagonist stumbles on the path of self-destruction. Many scenes give undeniable proof of his dramatic decline; he is pictured being out of control in the disco and self-harming, injuring his head and his hands in a desperate attempt to discipline them.

Dialogues are cut to the bone, the characters rarely talk, however, the hole left by the lack of speech is filled by music, which is almost always there. Music, apart from being an essential part of David’s life, carries a deep meaning especially when it is absent. Pounding music and suffocating rhythms are alternated with sudden and short moments of silence, especially when the protagonist turns violent and hurts others or himself. These quiet scenes are disturbed only by the protagonist gasping for air or by the sound of a table tennis ball that, just like a metronome, seems to tick his moments of madness. Once everything comes crashing down, leaving no way out, the piano music that shaped the whole film is replaced by unbearable silence.

With Prélude, Sabrina Sarabi aimed at showing how the twisted part of a dream can easily turn into a nightmare, how madness and anxiety can damage a fragile character, whose desperate need to excel causes him to embark on a journey of self-destruction. In the end, isolation becomes madness, hallucination blends seamlessly with reality and David’s unstoppable decay results in the only possible ending.