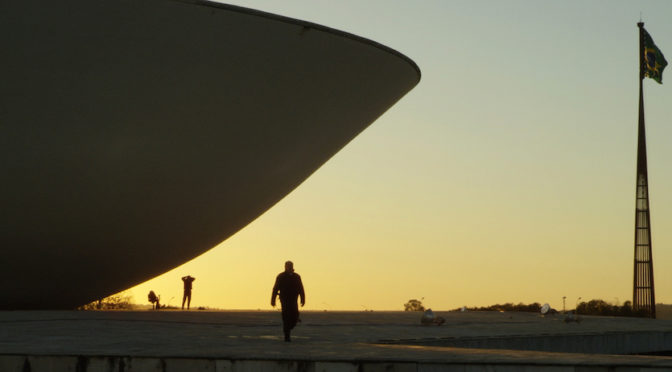 «Just for a moment, let’s dream together». This is the beginning of A Machine To Live In, directed by Yoni Goldstein and Meredith Zielke and shown at the Torino Film Festival “ TFFDOC/Paesaggio” section. The dream in which the film wants us to live is about Brasilia, the Brazilian capital built on a bare plain in a thousand days. Desired by the President Kubitschek, planned and designed by the architects Lúcio Costa and Oscar Niemeyer, it was introduced as a utopia that has become reality at its inauguration in 1960. Brasilia is a shimmering example of modernist architecture: It is a city with many shapes, many triangles, lots of white, lots of mirrors and «completely shadowless». Probably this is the reason why the incidence of ultraviolet rays causes many cases of visual impairment. But if we want to live in a dream, we have to see less.

A Machine To Live In is a film about utopias that wants to demonstrate to us that we all have one. It seems that Goldstein and Zielke are never tired of showing us new images to let us understand the many possible forms of a utopia, each one presented as a piece of the puzzle that makes up this film: a white horse galloping through the city, a wakeful writer in a hotel room, a Sputnik-shaped music box that repeats «the flame consumes itself by the idea» (and we could go on). So how to break free from this huge and messy Babel that is the collective psychology? This is precisely the film utopia: trying to connect the many experiences that it puts in the field, finding a thread between all its stories and the dreams that they carry with them. Certainly not all the threads are successful, and some are particularly dark. But on the other hand, utopias are not made to succeed. An example is Brasilia: «the failure of the most spectacular success in the world».

However, the film also tells us something else, that there is something terrifying in utopias, in all utopias. Towards the end of the film, while an actor who plays Niemeyer talks about the nostalgia for a time now lost and dreams of making it come true again, his face is replaced by that of Bolsonaro for a few seconds. It is a short but particularly alienating passage. In another scene the narrator asks us: “Doesn’t architecture talk about borders? It keeps the world out”. Therefore every utopia would be essentially identical to the opposite utopia and the Niemeyer’s socialist utopia is not different from the Bolsonaro’s fascist one: they both want to keep the world out, believing in the possibility of building another one. Truly there is something terrifying in all our dreams; there is a frightening blindness in wanting to impose your own rule on the world, without the benefit of an exception that confirms it. What you get is a world without exceptions, therefore without individuality.