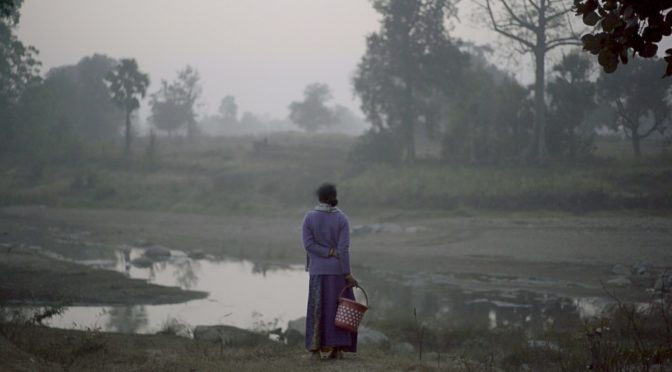 Since the 1960s in the Indian jungle the militant Maoist group of Naxalites has operated in charge of protection (even violent) of the tribal minorities of the sub-continent. Since their foundation these armed groups have played the role of “public enemy nr.1”  for the country’s internal security.

However for the rebels who had surrendered, total amnesty and protection from retaliation by former militant comrades, were always guaranteed within well-protected communities. And A Rifle and a Bag, the first work of the collective “NoCut Film” formed by Cristina Haneş, Isabella Rinaldi and Arya Rothe, is about one of these realities of “refugees”.

The three directors choose to focus their gaze on a former Naxalite family – Somi and Sukhram and their two sons, one of them still in diapers, who are victims of their recent past and of the contradictions of the new condition in which they lives. Indeed mother and father would like to enroll their eldest son in an elementary school outside the protected community in which they live, to offer him more possibilities, but to do so they need the caste certificate of Sukhram, the father. In India this document allows citizens to enjoy economic and social rights and Sukhram has forgotten it in his country, now unapproachable due to the strong Naxalite presence. Somi’s certificate is enough to keep the costs of that school only for some time, after which the child is sent back to study in the community of ex-combatants.

A community that seems closer to a slum than to a small town, albeit a provincial one, of the third millennium. Around the fire refugees tell each other about war wounds, anecdotes about the “good times” of militancy and do not forget the invectives against a state which seems indifferent to their conditions even if protecting them and which does not allow them to have the same possibilities guaranteed to the rest of the citizens after all.

Although with some redundancy A Rifle and a Bag would seem to be a film more about a “bag” than a “shotgun”, more interested in telling the reality of its protagonists and their painful condition rather than “aiming” at the heart of the problem. However combining the daily dimension and a more exquisitely comparative one, Haneş, Rinaldi and Rothe return to the viewer a powerful denunciation of Narendra Modi’s conservative and corrupt India, also reflecting on the theme of the sins of fathers and on the responsibility of these generations for the subsequent ones.