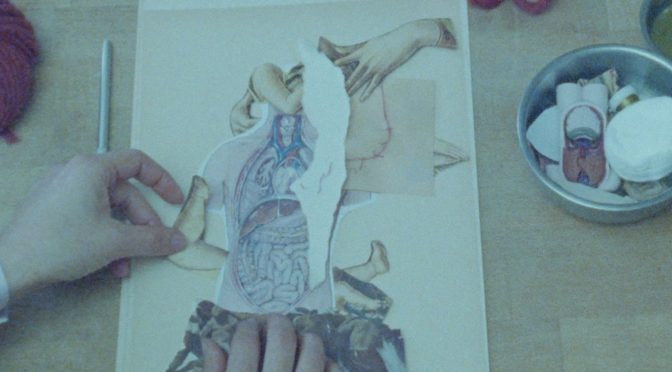 “A disorienting and extraordinary experience” that’s how Anna Marziano defines Al largo, her metamorphic and complex film, which combines philosophic research and cinematographic knowledge. The documentary wants to analyze the pain related to an illness, in a timeless context which connects the director’s personal experience and Nietzsche and Winnicott’s works.

Shot on S8mm and 16mm, Al largo gradually develops into a 4:3 multifaceted collage, created according to a coherent logic, managed from the inside. An analytical and detailed editing ‘assembles’ different subjects: inserts of reality, manipulated in post-production or modified from the inside through artistic gestures, director’s creative performances on the spot (collages and embroidery on paper with a sewing machine), settings of objects with a symbolic meaning. The film is hermetic, layered, often the viewer misses the meaning, which is hidden in deep interpretations trespassing the form. Therefore, images have the same function of words in Poetry (symbolism, fossils and the sea mystery recall Eugenio Montale), they occupy a specific space, which is never arbitrary and has a precise aim in the final picture. Shots are simple tools for editing, which time can accelerate (like silent film’s speed) or extend in hanging longshots. Al largo is a hybrid entity, in which sounds and images go in different directions. In the first part of the film, the offscreen voice of Francesco Nash, rapidly framed, is the soundtrack of the editing, which is totally independent from the story told. The same happens for the full or commented readings of extracts from the works of Ovid (Metamorphosis), Sigmund Freud and Lou Andreas Salomè (letters), Paul Ricoeur, Montaigne, Claire Marin, Ernesto de Martino. In the second half, the documentary simply investigates refugees’ rights, forensic ethno-psychiatry, transcultural criminology, cancer patients, scientific divulgation about fossils.

Anna Marziano quotes Ricoeur’s words: “illnesses reveal that our existence is naturally unstitched. The patient suffers from this life condition. Which is the aim of the cure? To stitch up”. The documentary is the director’s mystic attempt to stitch (up) the deep pain caused by a bad diagnosis received by a loved one. This meaning is represented by the totemic presence of a sewing machine. It happens by constantly stitching and unstitching  the film formal fabric, thanks to her talent devoted to aesthetic ambition.