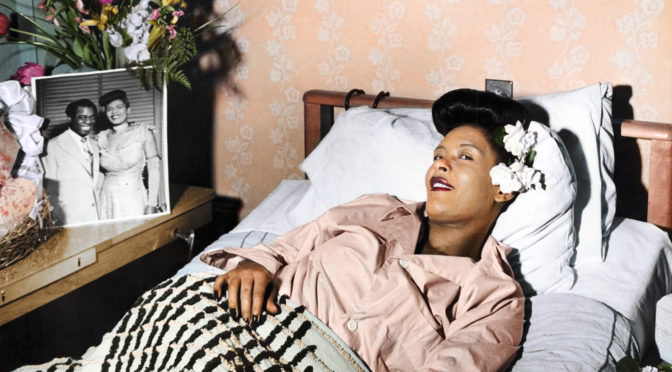 February 6th, 1978 – On a sidewalk in Washington D.C., a body was found. It was Linda Lipnack Kuehl, a journalist who devoted the last ten years of her life to writing a (never finished) biography of the legendary jazz singer Billie Holiday. During her research, she interviewed dozens of people and investigated thoroughly on the singer’s life. The heritage she left is priceless: 125 audiotapes, 200 hours of interviews and a manuscript. Billie is the result of the analysis and punctual use of this unpublished material: a colossal project directed by James Erskine, who decided to create a documentary about the singer and then found himself in charge of a rare task, beginning with the purchase of this precious material from a collector in New Jersey.

Billie Holiday, who died in 1959 at the early age of 44, has left her mark in music, being one of the most influent jazz and blues performers in history. Trying to tell her artistic and personal value is hard, because of the technical production obstacles to start with. For example, the director points out that “There is basically no colour picture or film showing Billie”, and he realizes that her world would stand out for its colour. Thus, the colorization by Martina Amaral makes the documentary tangible, close to us and to all the bright colours in Billie’s life. Videos and photographs are accompanied by the words of people who knew her and by Billie’s own words, mostly in her music. Linda Lipnack Kueh interviewed many people: from her famous childhood friends such as Tony Bennett and Count Basie, to pimps to FBI agents, and all of them contributing in painting a complete and multifaced portrait of the enigmatic singer.

The true preciousness of Billie is the soundtrack, which enriches the story maybe more than anything else. The amateur interviews, recorded in noisy ‘70s bars, represent another technical challenge and resembles some fossils which Tom Wollaert has discovered and thoroughly restored. Linda makes evident her own presence by appearing in the interviews and by being in old family video footage. It was necessary to include her in the documentary, which was created thanks her precious work, even without losing the focus of telling Billie’s story.

James Erskine portraits the life of a genius woman, who fought against addiction, misogyny and racism, a woman a lot different from him but whose story he made modern and powerful thanks to an efficient narrative and care of the details. It is quite evident the effort of an ethnically heterogenous team, which made the film even more close to reality. Billie is the most complete and homogenous work about the artist at our disposal today: a gem that is now shining after over fifty years and that the viewer is almost afraid to admire, a great opportunity for those who don’t know her and a real heritage for those who still love her and listen to her music.