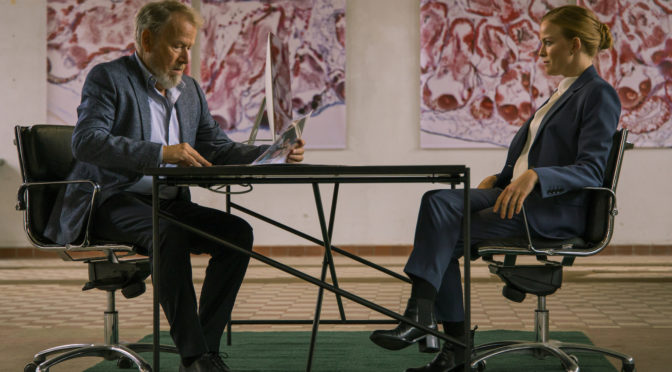 In a former sugar factory that has been converted into laboratories for experimenting therapies capable of stopping aging, Dr. Ruben (Signe Egholm Olsen) conducts her experiments, financially supported by Thomas (Anders Heinrichsen). The theories of the doctor, specifically a veterinarian, allow her to soon find an effective cure only for men. However, therapy for women is not so immediate and requires additional research, which is performed on human guinea pigs – including Mia (Sara Hjort Ditlevsen), Thomas’s wife – who are kidnapped by Ruben’s two male assistants, the Dog and the Pig.

Women are victims of a system that favors men: indeed, the latter are not just the only ones who can access the therapy but also those to whom the high, healthy, bright and spacious floors of the institute are reserved, where they are received by the doctor to be later introduced to therapy and receive treatments. On the other hand, women belong to the slums, the dirty, dark and claustrophobic damp basement where the horror of research takes place.

The direction is not lacking in some stylistically appreciable ideas, supported by good acting and excellent photography. However, the film probably lingers too long on violence, which is systematically aimed only at women for much of the story. Women are killed, branded, whipped to lead to an early birth, drugged, tortured, mutilated, humiliated, subjugated. Only sexual violence is missing. Then when the positions are reversed, the violence suffered by men is infinitely less disturbing and ends in a few moments. To further complicate the picture is the fact that men exercise their misogyny by following the orders of another woman, Dr. Ruben herself, willing to sacrifice her peers in exchange for the secret of eternal youth, which she intends to use in primis on herself.

The decision to schedule Breeder to coincide with the day for the elimination of violence against women is however questionable. If it is true that the film can be interpreted (not without effort) as a denunciation against patriarchy and violence against women, it is also true that it is a film of violence against women: it shows it without sparing (and sparing us) anything. Furthermore, the violence suffered generates new ones as the final redemption demonstrates, which is by no means consoling: women are able to free themselves only by acting like their executioners.