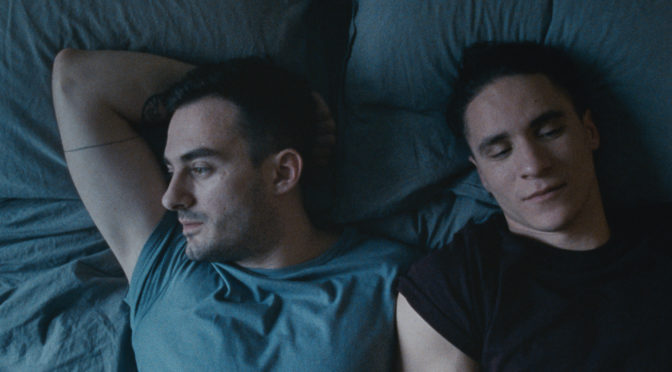 First work of the director Eugen Jebeleanu, Camp de Maci is inspired by a real event happened in 2013 in Bucarest, when a group of homophobic demonstrators interrupted some LGBTQ+ film screenings.

Using this real event as the background, Camp de Maci tells the story of Cristi (Conrad Mericoffer), a boy who lives two different lives. Officially, Cristi is a policeman, the representant of an institution which is still clearly male-dominated. Privately, he is a homosexual (who has come out only to his family) and has a relationship with Hadi (Radouan Leflahi). While his French boyfriend is visiting, Cristi is sent to suppress the protest of a group of homophobic demonstrators who interrupted the screening of a LGBTQ+ themed film. Surrounded by the chaos of a crowd of shouting nationalist protesters, Cristi’s two lives intertwine when he finds out that one of the demonstrators is a former lover of his, who jeopardizes the secretness of his sexual orientation.

In the first half of the film, the situation is captivating. Almost everything about the main character’s life is unknown: the viewer only knows that Cristi is a homosexual policeman, who is experiencing a life crisis because of that. Despite having informed his family about his sexual orientation, he is not able to come out to his friends and fellow policemen. Needless to say, a homosexual policeman is in a difficult position in a country like Romania, where the LGBTQ+ community is still fighting for its rights. One of the main aims of the director is to speak out against a society founded on male-domination and heteronormativity. His idea is to make a film which, by telling the story of an ordinary man, could inspire a wider debate about the difficult situation of the LGBTQ+ community. The Romanian police force is seen as the embodiment of masculinity and the main character is a victim of this prejudice. Cristi represents the conflict and vulnerability experienced by his community, in and outside Romania. By trying to disguise his real history and identity, Cristi avoids the problem and is subjected to self-censorship, struggling to find his place within society.

The escalating tension and the premises of the story suggest that something is going to happen. But nothing does. Cristi doesn’t change, he stays the same, like the other characters of the film. The development of the narrative and of the main character stops. Despite it being provocative (and frankly annoying), the director decides that Cristi -and the viewer- must remain stuck into his discomfort and worries. His social context forces him to face an intense inner conflict, which he literally cannot overcome.