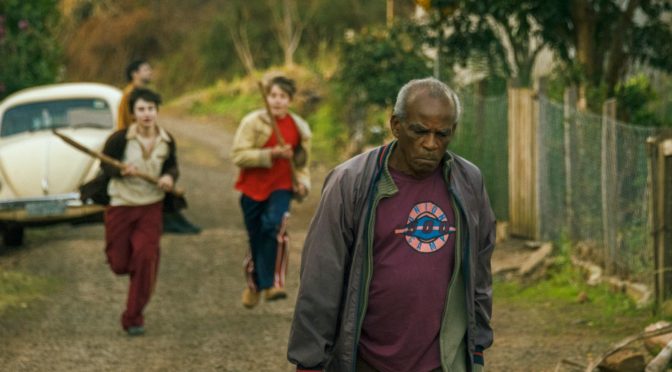 Even before the images, there is a white light that suggests the coordinates for viewing the film. A light that invades the screen and appears as an eccentric substitute for black, on which the opening credits flow in reverse, from the top to the bottom, suggesting a backward path. This inverse motion is the spirit that moves Casa de antiguidades, the film of the Brazilian director João Paulo Miranda Maria that first looks at the past to talk about the present.

At the heart of the film there is Cristovam (Antonio Pitanga), a black man who moves from the north of the country to a former southern Austrian colony to work in a factory that produces milk. Forced to deal with a xenophobic and conservative community from the beginning, the protagonist seeks refuge in an abandoned house where he finds some relics related to his past.

The choice of the 81-year-old actor Antonio Pitanga, the iconic face of Brazilian Cinema Novo, for playing the role of Cristovam, lies in the director’s desire to establish a bond with the cinematographic and historical past of the country. Staged from behind or wearing an impersonal suit-diving suit, the protagonist appears more like a hidden than a revealed figure. In the only scene in which he tries to tell something about his past, the camera cuts him out of the frame, as if it wanted to make us remember that repulsion mechanism started from the community itself. A mechanism that is placed at the basis of the country’s history and that clear split between the rich south, populated by people of European origin, and the poor north, inhabited by the descendants of Africans who arrived with the slave trade in Latin America.

The relationship with past and tradition is reported not only by the narrative canvas but also by the visual dimension. The direction uses a few but precise shots (sometimes a scene is represented in its entirety in a single plane) to highlight the contrast between the rural and the contemporary world. The same one found in Bacurau (Kleber Mendoça Filho, Juliano Dornelles, 2019), a film that describes the cultural contamination that Brazil has had to undergo due to colonialism, like Casa de antiguidades.

The house in where Cristovam takes refuge, the same that gives the film its name, is a meeting place between the character and his origins. The film proposes a direct dialogue with the past to talk about the social tensions of present-day Brazil, recovering the roots in the folkloristic imagery and appropriating a dense symbols apparatus that make us remember the revolutionary figure of the boiadeiro (the Brazilian cowboy) in which the protagonist incarnates, in the hope of a radical cultural change.