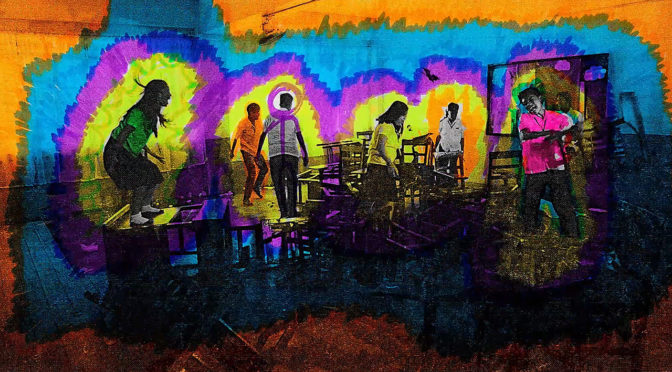 The “cleaners” to which the title refers are a group of eight students from a strict Catholic school in the Philippines. They are defined in this way because they are the protagonists of four stories in which they are forced to respect obtuse educational rules that require them to be clean and correct at all costs. Cleaners also describes the pressures that young people experience from a world that is dirty and superficial.

The film was made with the stop-motion technique, combining more than 34,000 frames printed on paper and colored by hand with highlighters. The operation gives a material effect to the images, making the viewer perceive the physicality of the materials as well as the commitment and dedication employed. The result is certainly original and allows the film to distance itself from a clean and aseptic digital aesthetic, which has become a new canon for more than twenty years now. This practice also allows to bring out print imperfections and the lack of fluidity and sharpness typical of stop-motion. Without worrying about the imperfect result,  dirty I would say, Barit adopts a technique that refers to the theme of the film itself, to the inconsistency of an education of institutions that hide inefficient mechanisms behind the patina of rigor and perfection. Cleaners wants to peel off this patina.

The episodes staged by the director represent typically adolescent situations. What emerges is the children’s non-compliance compared to the strict and questionable rules to which they are forced. The first episode describes the embarrassment of a girl in using the school bathroom. Similarly the protagonists of the second one are dealing with the recitation of a traditional dance in which they do not want to perform. The couple at the heart of the third one is struggling with sexuality and the roles of men and women in society. But it is the fourth episode that directly addresses the political issues hitherto only hinted at, with the story of a boy who is pushed by his parents to act incorrectly entering the world of politics.

The frames printed in black and white were colored giving prominence to the protagonists associating a color to each one. At the end, tired of wanting to make them appear perfect and clean, Barit causes them to rebel making their personalities explode and contaminating the images with the colors that until then had remained as compressed in the silhouettes annihilating any sterile formality with this revolutionary act.