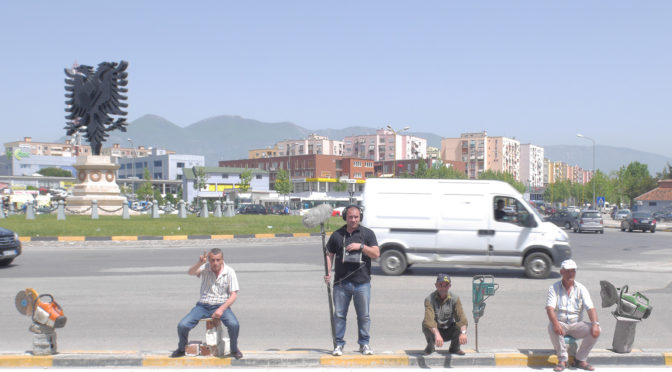 Is one hour enough to re-discuss the complex issues of work and technology in the contemporary world? Obviously the answer is no, but Fabrizio Bellomo is capable of taking advantage of this time, even if short, to propose a huge amount of suggestions and questions, just as he normally does with his peculiar art works. It is an experimental film, in which an exorbitant number of images taken directly from real life is represented on the screen: from Facebook scrolls to Power Point presentations to municipal council recordings and television broadcasts. But Film proposes a clear way through the contradictions of progress, leaving us the questions: has technology made us less slaves than work? Does it allow us to be more masters of our tools? Or will we continue to live forever subject to objects and to the power they have to give us sustenance and dignity? What does dignity mean for a man/worker?

Bellomo proposes these ideas to meditate on it by taking us with him in a year of artistic interventions, from the abandoned factories of Bari to the Lumezzane “City-workshop” in the Brescia area to Eastern Europe. A spontaneous journey, which appears broken up and chaotic as shown by the images overlapping the scene, but that is capable of revealing a new class struggle fought by day laborers, riders and prostitutes. He gets in the way too, Bellomo in first person, who introduces the theme of art tools at the same time. Just as he uses the “motivational” posters in factories, relocating them in urban contexts to highlight their dual nature of ancients and detectors of today dynamics at the same time (for example “Work as if your boss were close to you”). In the same way Bellomo titles his work “Film” to make us remember the original form of his instrument, the film.

A dialogue between a truthfulness of the past, a reality that we know and we can manage, and a present marked by the dematerialization of the object, the man’s livelihood tool, and the rules that supported it. In the chaos man and instrument merge without any mutual benefit. So the image of the white hare without hind legs, harnessed on a pair of small wheels, become the programmatic symbol of Bellomo, the evidence of how a technological progress can not necessarily coincide with a social one, on the contrary. A vision of th whole is lost and every man finds himself alone, fighting the battle for his own rights all alone.

A particular and unsettling film, to be experienced as a performance with the director.