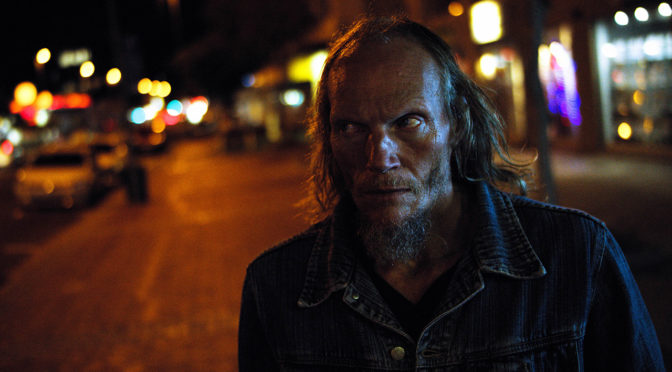 Specialized film critics were caught rather off guard, because cinema has experienced a change when it comes to the ways it is exploited. On the other hand, new perspectives emerged in terms of film discourse and instruments to understand it. It is especially evidentin films like this one, in which the stated intent is to tell a certain audience to beat it. That being said, it is very difficult to examine Fried Barry without distorting it, but it is also unnecessary to dissect it in order to extract an additional critical consideration, which would be “too much of a good thing”.

The plot proposed by Ryan Kruger is simple: it is the story of Barry, an addict “fried” by heroine, who is also a despicable husband and a terrible father. While looking for his next hit, he is kidnapped and “inhabited” by an alien, who deprives him of his last drop of good judgement. Like E.T. but on drugs, he will watch over Cape Town before throwing himself into a spiral of violence, sex and drugs, pushing the limits of the gore genre.

Surrounded by a compulsive debauchery, consistent with the dysfunctional spiral of the main character, Fried Barry is a mad race, during which the director generously draws inspiration from the genre repertoire, almost ad nauseam. As expected in a script-less film, rather than around the writing and acting process, it mainly revolves around Barry’s and other characters’ weird looks. Viewers can only believe one thing: the film’s stated intent is to push the boundaries of tolerance with provocations on different levels, the most hilarious of which are usually outside the diegesis. In other words, the film is a parody and an homage, but also the disjointed caricature of itself.

Going back to the initial consideration, Fried Barry is to be watched with curiosity, a fair amount of tolerance and prior awareness, being ready to face the discourse variety offered by the Midnight movie genre. Or instead, it is necessary to get rid of any possible preconception, spending two hours wondering what the hell is happening.