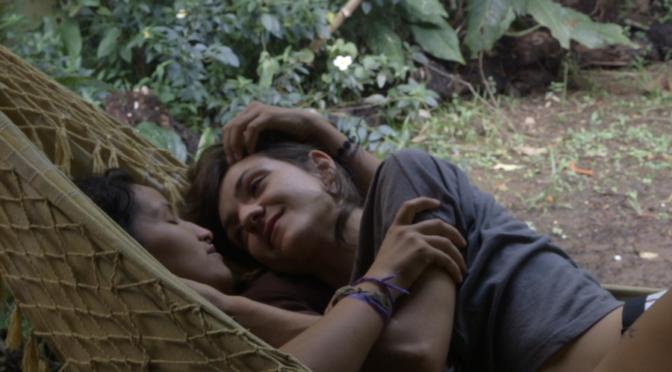 Presented in the International section of the festival, the film is about the life of a non-monogamous and unconventional family made up of a nine-year-old boy, Derick, Tammy’s biological son, and his other three mothers who raised him: Bruna, Shiva and Ana.

The group of women, bound by mutual love and the desire for emancipation, decide to build a house together with their own hands. From the beginning of the film, which is set in a forest on the southern coast of Brazil, and throughout it all, the daily life scenes of this peculiar family are marked by the construction works, by the house that gradually takes shape. However, the aim of these women is not only to build a physical place, a safe one, where they can raise little Derick, but also to create their own place in the world.

This construction is inscribed, in fact, in a larger framework of resistance and struggle, some recurring words in the documentary by DêKelm. The house – whose foundations rise significantly in an occupied area – community life and music are the means through which these mothers try to teach their child the respect for diversity and the importance of inclusiveness and, overall, to unhinge prejudice and the narrow-minded attitude of a country which is still profoundly male-dominated and homophobic.

Music, in particular, becomes a concrete means of militancy, a way to make one’s voice heard and communicate one’s needs. Combining two apparently irreconcilable styles, such as the observational documentary and the musical, the film creates actual musical intervals which, through the use of streetwear clothing, gazes into the camera, hip-hop movements and choral scenes, remind of the aesthetics of music videos.

The soundtrack is by the band Taiobas, which take an often misogynistic and macho genre like rap and re-elaborate it from the female perspective, bringing it back to a space of resistance and a language of rebellion. Rap, as a direct and straightforward means of expression that arises from marginality, here becomes a vehicle of social change and, at the same time, of an autobiographical story: a redeeming outlet that allows Tammy to channel her experiences into creative communication. Integrating the images captured by the director and those by Derick with his digital camera reveals to be an effective choice. It is precisely the latter who provides a clear point of view, and reveals the spontaneity with which he lives these new, freer and more affectionate relationships, that are capable of broadening the very concept of motherhood.