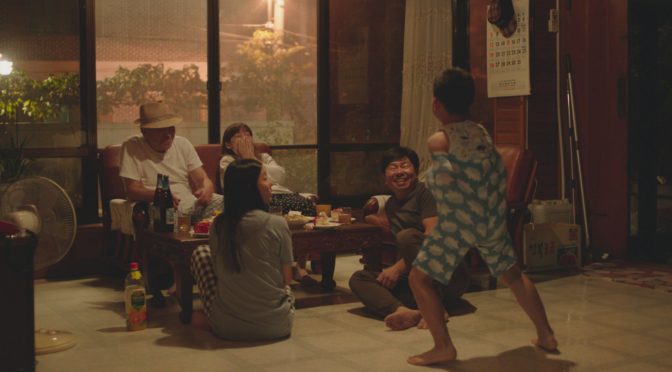 “I long that far away place, where my loved ones come from”: these song lyrics open “Moving on”, first Yoon Dan-bi work, winner of four awards at the Busan International Short Film Festival. These lyrics seem to suggest a return to the roots for the director, back to her starting point.

And this is also what happens to the main characters of Yoon’s film, a brother and a sister who leave the house of their divorced father, a humble street vendor selling knockoff designer shoes. The children move to their grandfather’s, a suffering old man who is often hospitalized.

At first, the siblings do not seem to be very keen on their new accommodation: grandad’s house is big, but old and in the suburbs, and speaking with him is neither easy nor interesting. In addition, their father is often away because of the uncertainty of his job and, when he does not work, he studies for an exam to get a permanent job in a construction company.

Nevertheless, a glimmer of excitement brightens this silent abyss when the children’s aunt, their father’s sister, shows up at the door. The woman is also about to divorce from a violent husband and, astonished by the warm affection shown by her nephews, decides to stay a little longer in grandad’s house. From this moment on, the siblings will find it easier to accept their new condition and settle their conflicts.

The plot and the title of the film are clearly antithetic: rather than “moving on”, Yoon’s main characters seem to slowly adjust to a state of placid stillness and immobility, emphasized by the steady camera long takes composing the shots. This happens because the story develops in the summer, in the big old grandfather’s house, representing the “far away” place mentioned in the opening verse, which turns out to be not that far away after all. Each one with his own troubles and demons, all the family members turn to the character of the silent grandfather for recharging their batteries before going out and face their daily grind, made of bitterness and disappointment.

Emphatically and gracefully performed, Moving on represents an emotional and tender ode to stillness, to taking a break, to contemplate and discuss. All of us could take inspiration from Yoon’s film for our own life and personal experience.