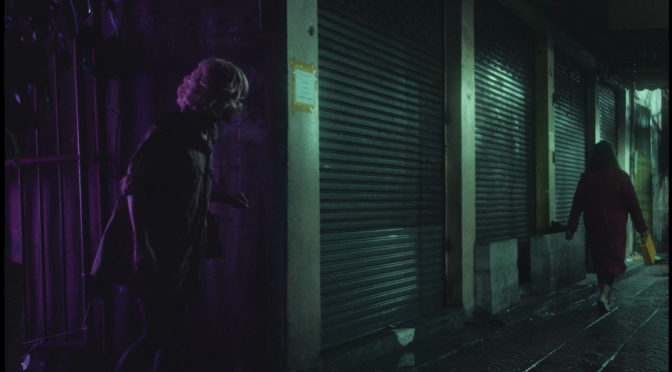 Red Aninsri opens with a dialogue between cats. They communicate through the most artificial of cinematographic techniques that allow them to speak: dubbing. No attempt to follow the expressions of their faces or their movements. The human voice adheres to their bodies forcibly asserting its technological superiority. That of Red Aninsri is a universe in which everything is exquisitely fake, where an incurable discrepancy remains between the images of the world and their sounds.

«Ang. Often a whore. Less often a spy». Thus the protagonist of Ratchapoom Boonbunchachoke’s film introduces herself to the audience looking straight into the camera declaring both her identity fictionality (as a spy) and that of the world in which she acts (as a film).

Ang (played by Sarut Komalittipong but dubbed by Teerawat Mulvilai) is a ladyboy forced to dress up as a man to capture Jit (Atikhun Adulpocatorn), a subversive student who threatens to undermine the integrity of an elusive “Government” whose actual political orientation remains an enigma.

Ang’s identity is a construct that is the result of a problematic carnival stratification. Neither her voice nor her clothes belong to her. Nor her actions: «Read the script. Dress as indicated». This is the peremptory tone with which she is told what to do by a talking radio, her boss. A voice that directs not only the espionage actions but also the cinematic narrative itself. In the world of Red Aninsri, framed by a rounded 4:3, everything is shamelessly cinema. The mechanisms of the spy story regulate every action in a world where the Cold War is never over

Ang should ensnare Jit making him fall in love with her (dressed as a hypothetical him). But in Boonbunchachoke’s universe there is no difference between reality e fiction. The two words lose any status of validity, any differential value towards each other. Ang sinks into the sea of carnival fabrics that cover her falling in love with her prey. Just as she ends up embracing the beauty of the cinematic universe that hosts her, unable to detach herself from those démodé stylistic brands of which she initially makes fun.

From the total white with which the short film by Boonbunchachoke (30′) ends, emerge the images of Mom, I befriended Ghosts, debut in the feature film by Sasha Voronov. What you see in front of your eyes is a world perpetually covered in snow, hit by a pandemic whose causes – it seems – are to be found in the water. That is to say in the main component of life itself. An irreversible process of cultural impoverishment runs parallel to the demographic decline: forced into an incessant search for survival, humanity has become a shadow of itself. Each action contributes to the restoration of a primitive and bestial time characterized by violence, abuse of others (no longer recognized as an equal but as an obstacle to personal sustenance) and incommunicability: dissolving itself, the human language is ousted by grumbles, screams and heavy breaths.

As in Il tempo dei lupi (Le temps du loup, Michael Haneke, 2003), the stepmother Earth returns to show humanity its insignificance. The Voronov pandemic annihilates the human body and destroys all its moral and linguistic scaffold bringing the world back to its original silent state. And the image to a pure and deadly white.