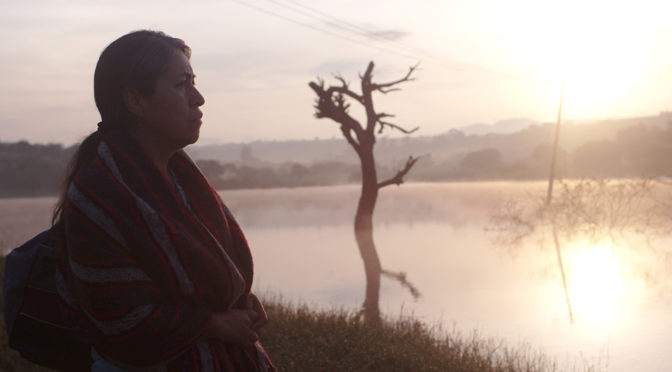 This dedication closes the end credits of a movie that doesn’t end for real, but it continues to vibrate in the powerful echo of reality that tells. Immigrants, their uncertain journeys with a lot of promises, families of missing people : the movie is about these facts following Magdalena’s journey, a mother who’s looking for his son, who left for the United States in search of safety and disappeared for months. Born as a short film in 2012, the movie grows with its director with the bad situation that tells, about violence that tears mexican society apart and it opens a wound that doesn’t stop bleeding. Fernanda Valadez chooses to analyze that blood through the measure of intimacy : Sin señas  particulares denounces the pain of a country through the pain of a mother.

The direction, perfectly at the service of the content, builds an aesthetic language autonomous and really defined. Long shots, sustained, fierce, that they cannot give up Magdalena objectives in the foreground and they tell everything. The dynamic intensity of the images is not given by the rhythm or assembly, but by long shots that follow a defined stylistic plan: the director works the image (its depth and its focus) and she reshapes it in a poetic way with great expressive violence. The blurry effect (typical of Hollywood close-ups), extracted from its classical context and brought to exhaustion, is an autonomous sign that exceeds the style, it alters reality and deforms it. Myopic background that forces the viewer’s gaze and it glues it on the only piece in focus: the face of the speaker who suffers and meditates. In this way it creates a sense of oppression, we cannot see anything else, understand blur or something that helps us to understand them: that’s the condition of Magdalena, who is forced to look for answers in a strange and violent place where women e men disappear, where they are reported missing and where bodies remain nameless. The off-screen becomes an extension of the frame and it participates in this aesthetic of the anonymous: the dialogues are often out of the image and we cannot see who is speaking. Darkness and silence become narrative possibilities and the absence of image a statement. The director alternates these choices with open and deep solutions and this allows you to freely investigate the space. The camera doesn’t need to move too much and it does so through the movement of a truck or a van. The pure sound is used with meaning and intelligence: frames are often linked by sound. The music is minimal, there are a lot of natural noises and carpet of sounds (but there is no music in the credit ends).

Sin señas  particulares transforms the horror in language and it uses the religious culture of a Christian country (it explains their names, Magdalena and Jesus). The result is the representation of the evil in its absolute religious form “el Diablo”. Fernanda Valadez sensitizes a terrible issue, showing us a wild Mexico where busses disappeared in the dust like the immigrants who are trying to save themselves. You save bags but bodies remain nameless or without “particular signs”. The story of a mother and a son desaparecido becomes the story of all of us

Magdalena “From the back you look like my son”.

Miguel “From the back we all look the same”.