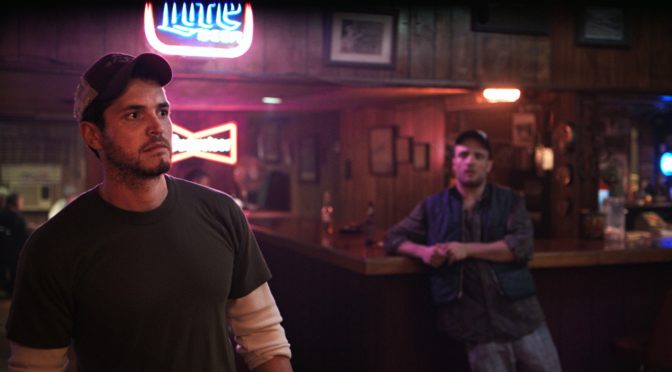 A slow overview opens onto the mountain landscape of Appalachia; in the distance a feeble explosion destabilizes for a few seconds the peace of that vision of paradise. Everything is quiet. This is how The Evening Hour starts, the new feature film produced by Braden King who, after nine years from Here (2011), comes back adapting for the big screen the Carter Sickel’s novel of the same name. In his new movie, King focuses on the realistic life of American suburb, discouraging the classical stylistic noir narrative elements and instilling a deep reflection about the fate of an entire generation: young people feel disillusioned about a non-existent future, forced to suffer the pressure of a world that doesn’t give escape apart from becoming addicted to drugs and violence.

Cole Freeman (Philip Ettinger) is a health worker in Dove Creek, a small town in West Virginia where he was born and raised. In addition, Cole runs a small illegal painkiller trade to earn more money. The situation is complicated when his childhood friend Terry Rose (Cosmo Jarvis), who is also interested in Charlotte (Stacy Martin), Cole’s girlfriend, wants to produce and deal heavier substances. So he creates a conflict of interest with the dangerous local dealer Everett (Marc Menchaca).

Like in Here, also in The Evening Hour the landscape element dominates the whole thing.  In this last movie the landscape is like a frame that crystallizes a static reality and with no prospect for the future while in the previous one the Armenian landscape was a dynamic element and a point of contact between two souls. The great virtue of King is to highlight the claustrophobic aspect of Appalachian with accurate solutions in stage direction: alternating, for example, static shots of natural elements and fluid machine movements that follow the characters.

The journey, an important aspect of his previous movie, is faced in a different way. It’s not a physical route in a natural space that offers new horizons, but an introspective journey that allows the search of one’s own place in a hostile reality. The borders of Dove Creek are a limit that must not be exceeded: nobody can leave the small town and the more you can try the more you fall into the abyss. So Terry’s words are illuminating when he says “[Dove Creek] is a deep hole, that’s all.”

With a limited but effective direction, with a good script written by Elizabeth Palmore and a good cast, Braden King stages the hard life of a small community between two epochs: on the one hand the old generation that looks the world from its own home, on the other hand young people without a direction and always suspended between precariat, unemployment, drug addiction and with a general sense of inadequacy.