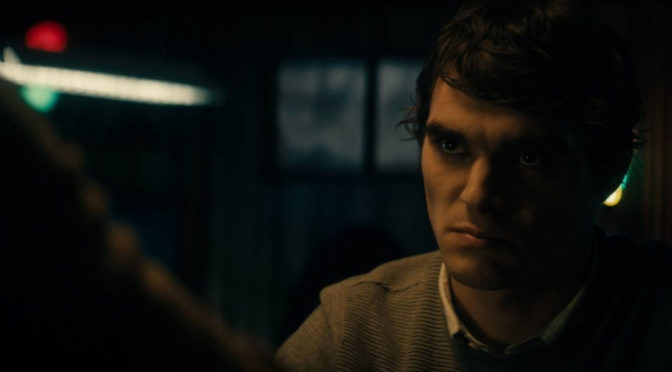 A bar, a few lights on: some dim colored neon-lights, the counter’s illumination, an old jukebox emitting a soft glare in a corner. Paul (Peter Outerbridge), the bartender, is about to close the place while outside in the night,a snowstormblows.All of a sudden Steve (RJ Mitte) bursts in,a wanderercarrying a story from a different bar, of a different bartender, of a different stranger brought there by the storm. From this first one, a lot more stories come up, while midnight approachesand someoneis relentlessly driving in the snow.

Presented out of competition at the 38th Torino Film Festival “LE STANZE DI ROL”section, The Oak Room is, afterNatasha Kermani’s Lucky, another title that is built around the mise en abyme principle.In this case, the Canadian Cody Calahan disassembles and reflects on the noir’s mechanisms through the story-within-a-story expedient,filling his movie with numerous tributes to the 80s’ genre cinema and with characters wholook like they are out of a Cormac McCarthy’s novel.Everyone inThe Oak Room, bartenders and customers, have at least one story to tell, and have to make themselves both narrators and listeners, in a continuous and unsettling exchange of roles, a game of mirrors that evokes the Sheherazade myth.

The Oak Room is made of dead ends, false leadsand narrative anomalies, with the oral narrative becoming a weapon of seduction and deception, a bewitching force that lowers the defenses ofboth characters and audience. Although Peter Genoway’s dialogues perfectly work and can be easilyfollowed, on several times the film directionseems to bring the audience’s attention on the images. In other words, one must have sharp eyes not only to orientate oneself in the darkness of a heavily underexposed photography, but also to find the right interpretation, a revealing detail that if not found could just be wiped out bythe ongoing flow of words.

From this point of view, the film’s beginning is fundamental, an actual declaration of intent. With the image of a bottle of beer glowing in the dark, at first upside down and then upright thanks to a twist of the camera, the darkroom mechanism is brought back. It is the gazing principle, reduced down to just one camera movement. It is here that The Oak Room’smeaning has to be found, that in spite of its screenplay’s high density, can give the genre scenes’ their status back.