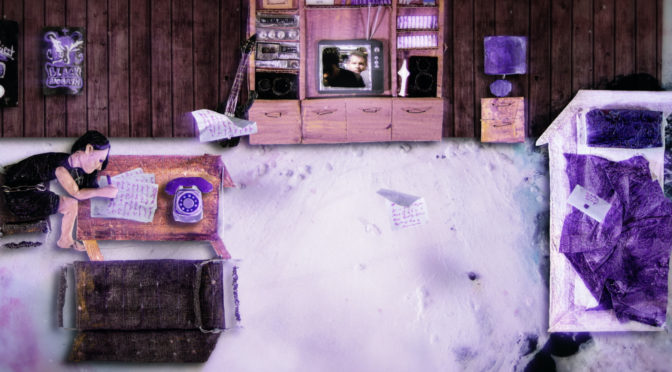 Eighteen years after the last edition, the competitive section of short films returns to the Torino Film Festival. Two programs, twelve shorts chosen from more than 500 titles for six female directors and six male directors from all over the world. Very different talents compared to a heterogeneous parterre that combines a fascinating and precious variety of techniques and ideas. It is proof of the importance and strength of a complex and demanding genre capable of “giving back the cinematographic machine in a small way” at an international level, according to the recruiter Daniele De Cicco

The first short film in competition is the Irish “A BETTER YOU” by Eamonn Murphy which addresses the theme of the double in today’s social media society. With an anthropological clarity similar to the one of Black Mirror, Murphy portrays the inconsistency of media avatars in a steam punk style film. The skilful and calibrated editing is the real special effect of an artisanal science fiction made of pure low-cost creativity. For this reason, it is more authentic and precious.

Creativity is also the hallmark of “JUST A GUY”, a German animated documentary that tells the love stories of three women with a common lover, the ferocious serial killer Richard Ramirez. A distillation of love and perversion for a raw and sagacious expressionism. Post punk animation (the color palette is oriented towards black, purple and fuchsia) makes the rough technique a very lucid means of communication. The Japanese director Shoko Hara manages to shape the obsession in the plasticity of the material. Inserts of real documentation combined with slimy and sticky sounds complete the uncanny success of the film.

From Iceland comes Ugla Hauksdóttir’s “SEALSKIN”, a short film that stages the magic of Nordic realism. The elegant and minimal direction is built on the cold and chiaroscuro shades of a natural landscape that seems drawn with ink managing to keep on the screen the purity and innocence of a radiant child, able to illuminate the pain of loss and the conscience of the father.
The Japanese “SLOUGH” by Tanaka Haruna and the film “MÜNHASIR” by the Turkish director Yesim Tonbaz Güler also revolve around the theme of the loss. The first is perfectly exemplified by the words of Haruna herself: “I wanted it to be a daydream”. And it is. Starring a mother who has lost a child, a snake and a yellow umbrella. The second tells about a woman struggling with a mysterious package for her missing daughter.

For Portugal “O NOSSO REINO” by Luís Costa, a short film that De Cicco defined as “a true visual Poem”. The image driven by a simple and subtle narrative inertia is reduced to its elementary status as a visual vehicle. It tells an intimate story saved from mannerisms without declarations and in a suspended space. The 4:3 format accentuates the longed-for lyricism of the shots in which you can feel the breath of those who pass through them. The suggestion is also the terrain of “BEFORE THE TYPHOON COMES” (even this shot in 4:3) by the young Chinese director Chen Yun. The autobiographical film is the reworking of an author’s childhood mourning: the divorce of his parents. An evocative direction knows how to capture the hidden details, the best scraps of the scene (apparently harmless portions of reality) and make them a cinematic marvel. A beautiful short with a deep and multisensory character. Chen Yun knows how to look at the world and grasp the invisible using sound very well.

“THE LAST MERMAID” by Fi Kelly and “LOS HONORES” by Sergio Barrejón are short stories united by the merit of a solid and effective writing in their diversity. The British short features a script that could stage in a Stand-Up Comedy with a committed subtext. The humor and stage presence of Janey Godley in the role of the protagonist Pearl, a high-sounding name given her nature as the last surviving Siren and owner of a marine-themed adult site, are irresistible. On the other hand, the Spanish film has a highly effective narrative mechanic with thriller shades capable of striking up to the last. So does “L’ESCALE”, a Belgian noir directed by Pieter De Cnudde that revolves around two mysterious objects: a bag full of money and a pen. A pulp-veined jewel.

The only Italian short film in competition is “UNA NUOVA PROSPETTIVA” by Emanuela Ponzano. Set in a historical time that remains indefinite until the end, the 4:3 film tells a story to tell many others about the refugees fleeing wars. The barbed wire is the fil rouge of iron between the ages, in a story about the importance of memory and its relevance. Evil (what Levi talks about in the final quote) is treated with respect and without rhetoric: there is no need to show it explicitly because gestures, looks and icons are enough to recall it. The Russian film “MY SISTER’S MERCY” by Vladimir Koptsev, centered on the Soviet invasion of Afghanistan in 1982, is also on the theme of war. It is a very short story (8 minutes) that manages to narrate almost without words the weak and volatile romantic contact between a wounded soldier and a nurse.

Twelve short films that demonstrate with facts the words of the selector Daniele De Cicco according to which: “the genre constitutes a safety cage. A series of rules that guarantee its effectiveness”. The short film due to its “short” nature is a form of short story in which writing is fundamental and where one cannot afford to neglect the details. Indeed, even the smallest element resonates in the final composition for which, citing Herman Hesse (La cura, 1925), it is invariably necessary «while working on the chosen construction and screwing the bolts of the entire mechanism, to have present […] the tone and proportions of everything».