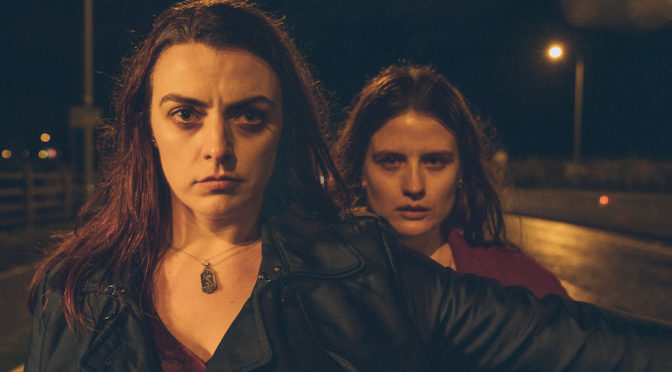 Intimist and political at the same time, the director Brady’s debut film shows the transgenerational psychological impact of the Northern Irish conflict through the story of two sisters.

Filmed on the border between Northern Ireland and the Republic of Ireland, it begins when Kelly (Nika McGuigan), missing after her mother’s death, suddenly comes back to the little town where she ran away from, bursting into her sister Lauren’s life (Nora-Jane Noone).

The archive images at the beginning of “Wildfire” immediately provide the coordinates to read the two protagonists’ tragedies. The emotional and personal events are closely intertwined with the political aspects of Troubles’ attacks first and the Good Friday Agreement’s amnesties later. However, despite the strong geopolitical connotation and the constant references to the nation’s past – both in the characters’ dialogues and texts on walls and signs, which punctuate the environments -, the film focuses on the psychological depth involving the two sisters.

Focusing on the details of their personal lives, the story explores the strong bond that, after a long separation, Kelly and Lauren rediscover between each other: a strong complicity that translates to the tireless attempt of saving one another from the suffered trauma. It is actually the two actresses’ interpretation to hold up the entire dramatic structure of the film. The director uses their physicality, the music and visual language to amplify the harmony that the two performers were able to create. The emotional force in their eyes, the fragility and, at the same time, the impetuosity transpiring from their voices create an instant communication with the audience, capable of making the protagonists’ mental distress appear genuine.

However, the personal confrontation with the past that connects the two sisters, divides them from the rest of the community. Since her arrival, Kelly is accused of being insane and, gradually reconnecting with her sister, Lauren gets the same treatment. The epithets “psycho” and “weirdo” reoccur several times to characterize the two women, and they seem to have a double meaning: on the one hand, these terms point out their gradual alienation from the local society, on the other hand they show their contradictions. As a matter of fact, Kelly and Lauren, despite their impulsive and unconventional actions, live through the remainder of their country’s tense history of hatred and violence with much more authenticity, as opposed to the quiet living of the rest of society which hypocritically denies it.