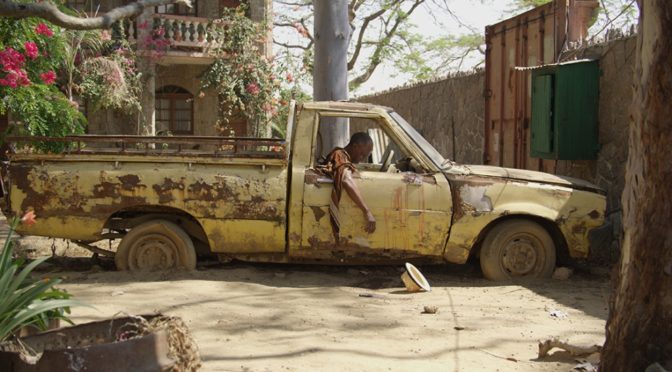 Madagascar, third millennium. In a jam-packed prison whose inmates have to spend their hour of air in an incredibly lousy court, there is a prison guard who is tormented by the memory of her homicidal father, who was never captured nor prosecuted for his crimes. When one of the inmates claims that he met her father, the guard’s obsession becomes even more urgent.

Co-directed by French director Maéva Ranaïvojaona and Austrian director Georg Tiller, Zaho Zay ­– which is the way Malagasy inmates answer to roll call – features both a formal and a narrative structure which places it on the edge between a documentary and a work of fiction. Since the main character doesn’t often appear on the screen, her off-screen voice is the fil rouge that lays out her personal experience through flashbacks and visions that retrace the story of her trauma. Furthermore, it makes a commentary on the miserable condition that the prisoners are forced to withstand.

The dimension of the memory of her trauma and the one of her job overlap more than one might expect: first of all, because of the protagonist’s desire to see her father’s face among the people she has to watch every day, so that he can make amends and give her long-awaited peace. Secondly, as a result of the fact that the directors chose to depict the scenes set in the degraded world of the prison, and the ones which take place in her mind and fantasy, in the same way: an objective, detached look – typical of documentaries – on a barren, godforsaken world that leaves no room for the hope to lead a peaceful existence. Due to a narrative style in which life and dream, reality and fiction, are intertwined, the viewer is left with no chance to understand what is happening, but only with an unsettling, hideous continuity.

The figure of the father is portrayed as equally unsettling and hideous. He only appears in made-up sceneries in his daughter’s mind, rambling through desolated lands in Madagascar, carrying on himself six dices he uses to decide the fate of those he encounters. The external gaze of the protagonist tries to investigate his leading motive to kill, going as far as to travel through time and see him as a child. An attempt at dialogue between two broken souls which will never take place in real life, but is only possible in the dream world. Fortunately, Ranaïvojaona and Tiller erase the distance between these two dimensions, just like they do with fiction and documentary, thus making it possible for father and daughter to reconnect and be reunited in a tender, tragic way.