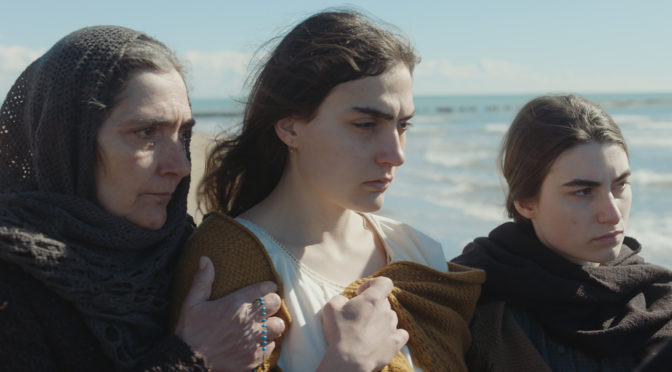 Laura Samani starts from the base elements with which she gets her hands dirty: water and blood, milk and tears. But above all, she draws on the rituals and popular beliefs of a fishing village in Friuli, an area far from the advent of “progress” and “modernity” (light bulbs seem like a joke), suspended in an almost ahistorical, mythical, and archaic time. Agatha’s stillborn daughter cannot be baptized and she is therefore destined to wander eternally in limbo, unless her mother sets off to reach the distant and cold Val Dolais, where there is a sanctuary of breath where the miracle takes place: the stillborn child is brought back to life for the duration of one breath, enough to make it able to be baptized and named.

A journey of resurrection, Piccolo corpo assimilates many of the topoi of fairy tales and initiation stories (from the bandits to the cave that recognizes and eats the women who pass through it, from the forest to the healing rituals) which include, above all, water, the primigenial element from which the film flows and into which it submerges. If tradition has often described water as a purifying and vital element, but also described its funereal meaning, in the film the sea hosts the prenatal ritual of purification of the woman about to give birth, as well as the sea as the ultimate destination, the landing place after the ceremony of the funeral. It is from these natural elements, closely linked to belief, folk song, and local myth, that Agata finds within herself absolute faith in her journey.

Like many literary initiation journeys, quietness brings the search for identity along with it; and the film starts from a question as simple as it is ancient (almost as old as man himself): if someone does not have a name, it is like they do not exist. In a story obsessed with calling things by their name, there is not only the drama of Agata’s identity, who cannot recognize herself as a mother, closely linked to the one of her daughter, who was born dead and without a name (hence non-existent), but also the identity of Lince, a travelling companion who agrees to join the lead character in exchange for half of the contents of her box (the small coffin). In an all-female world, where Agata embodies traditional and maternal femininity, Lince, in addition to not having a name of her own, casts off her feminine clothes and introduces the only “masculine” look into the story.