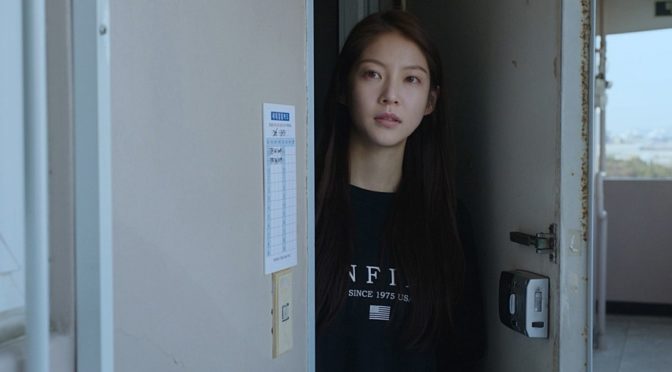 Jina (Geong Seung-yeon), an exemplary employee in a credit card company’s call centre, is a bashful and reserved girl, strictly attached to her habits and to the peaceful succession of places and acts that mark her days, which she divides between her little apartment and the workplace.

The limited area of the bedroom where she sleeps and eats, as well the narrow workstation, fenced by plexiglass panels, are the only places in which she feels comfortable. They are reassuring cores where she tries to isolate herself from the outer world. However, both of the contexts turn out to be permeable, and the incursion into her life of two people generate little cracks in the bubble that she tried to build: the arrival of Seong-hun (Seo Hyun-woo), a new tenant, after the death of the former neighbour; and Sujin (Jeon Da-eun as), a young intern that Jina has to train. The thorough and respectful observation of her alienated existence becomes an occasion – as the title suggests – for a reflection about loneliness, which is a choice and a suffered condition, and about the invisible condition of distress involved. In doing so, Sung-Eun Hong chooses a minimal approach: she just follows the protagonist’s actions from afar. The shooting style is also distant but effective in bringing the viewer in the systemic alienation from the reality experienced by Jina, obtained also through the constant shots of the electronic devices that surround her.

It is irrelevant if they are the headphones, the computer she uses at work, the cellphone, the earphones she puts on while walking or the television constantly turned on, what matters is keeping the mind distracted, spending the time, like the cigarette she can never smoke completely during the lunch break. From here stems the expressive power of when, in one of the final scenes, Jina turns the television off, opens the window and gets hit by the light from the outside, a visual transposition of the redeeming desire from her own apathy.

If her inadequacy in social relations is clear and central to the entire film, the plural title is not as easy to understand and suggests that the other characters feel some sort of discomfort too, each in their own way. The feature film debut of the South Korean director – in Competition at the TFF39 – can be considered a denunciation of a problem that is far from being an isolated case, on the contrary, it pervades our contemporary age.