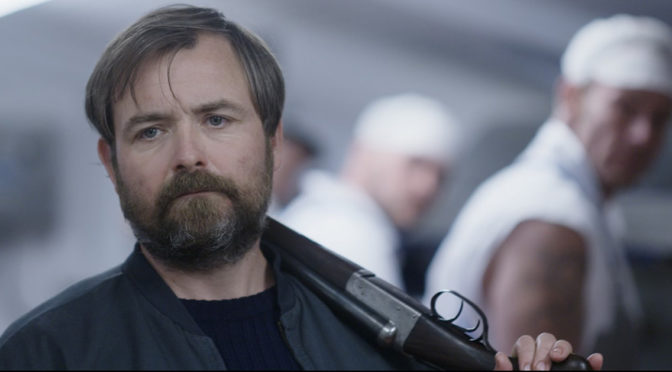 “If I survive, I’ll kill you all”. Bull (Neil Maskell), addressing his enemies, who were once his family, utters these words which would belong in the banal prologue to a classic revenge movie. The British director, however, astonishes the audience of Torino Film Festival ’39 and presents an extraordinary work which finds its essence not in the unexpected and desperate need for revenge but in a ruthless search for salvation.

Bull is a criminal who, in the service of his father-in-law Norm (David Hayman), threatens small realities in a disenchanted suburban England. However, when Gemma (Lois Brabin Platt), Bull’s wife, demands a divorce, the protagonist finds himself catapulted into a world full of threats, in which the only value left is Aiden, his son. Norm is aware of Bull’s dangerous nature, shown through heartbreakingly powerful scenes of pure violence, and he cannot risk the collapse of his family and criminal empire. In order to thwart this threat, he decides to kill Bull, but not before taking his son from him.

The lead character cannot remain powerless to all this suffering. Once his world, based solely on cruel certainties, turns its back on him, Bull becomes aware of his real mission: obtain salvation for his son. Aiden is an innocent child who grew up in a violent and unhealthy context from which he cannot escape. The only one who can set him free is the evil demon nested in his father, capable of transcending the concept of mere revenge. The search, not desperate but calculated with algid coldness and lucidity, finds a cinematographic correspondence in the sharp blades he uses to kill his victims. The sites of the killings retrace his past life, from the house of his beloved mother to the amusement park where, together with his son, he had lived his last moment of happiness. Therefore, the link between past and present, perfectly portrayed via timely flashbacks, is the basis for the fulfillment of his (divine) mission.
Paul Williams, through Bull’s glacial walks and omnipresent grin, evoking the evilest anti-heroes of the past, gives us a shocking film, which makes the audience’s complicity with the actions of the protagonist, a cruel and vicious killer, its strong point.