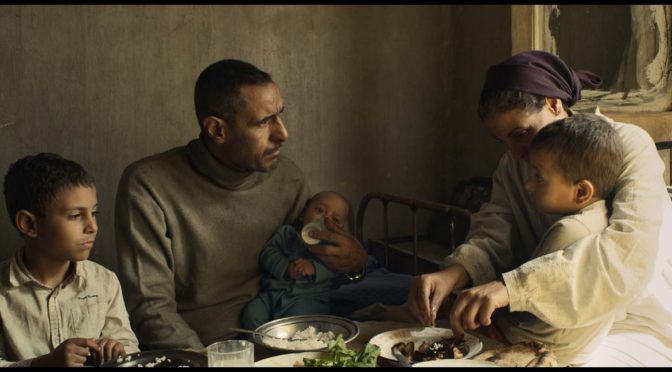 The first work by Egyptian director Omar El Zohairy was presented in competition at the 39th edition of Torino Film Festival. The film is a vehement criticism of the male domination of Egyptian society which leads to a dark comedy with gloomy humour, acquiring increasingly absurd tones.

From the very first shots, it is possible to perceive the bulky presence of an authoritarian husband who physically dominates a petite, apparently frail, wife who has no say in any family matter. During the birthday party of one of the couple’s children, the man is accidentally turned into a chicken, due to an awkward magic trick performed by an amateur magician. The extraordinary event changes the status quo of the poor suburban family: the enterprising spirit of the wife emerges. Until then, she had remained in the shadows and was devoted only to household activities. Now, she has to take the role of head of the family and provide to feed her three children (and the newcomer chicken who rents, without permission, the bedroom of the spouses).

The harsh realism, accentuated by the continuous and suffocating shots of a poor setting, made up of dilapidated buildings, industrial smokes and animals at the slaughterhouse, is being polluted when an innocent and uncontrolled, bitter smile curls the audience’s lips at the cinema. The gags that are presented by the movie actually originate from the continuous and absurd, unjustified failures which the woman, despite everything, has to cope with, while being conditioned by a sinisterly sexist community, which keeps away the feminine presence from every active role, and by an oppressive bureaucracy, which frustrates every one of its attempts of finding a job. Flowing into the grotesque, the black humour that hovers (and embarrasses), nevertheless acts as a real litmus test to comprehend how much corruption there is in a society where the main characters is forced to live in. The masculine megalomania, represented in the first place by the husband (properly punished by a spell that recalls the law of retaliation) and subsequently confirmed by the behaviour of the men who live in that community, is opposed by the dignity of a woman who, never giving up in the face of difficulties and humiliations, succeeds in imposing her own presence by acquiring a specific role in the actions of the men whom she meets on the road.

Omar El Zohairy makes his debut as the director of a feature film capable of bravely condemn the no-win situation with regard to the Middle East civil rights, where the emancipation of women remains anachronistically a taboo.