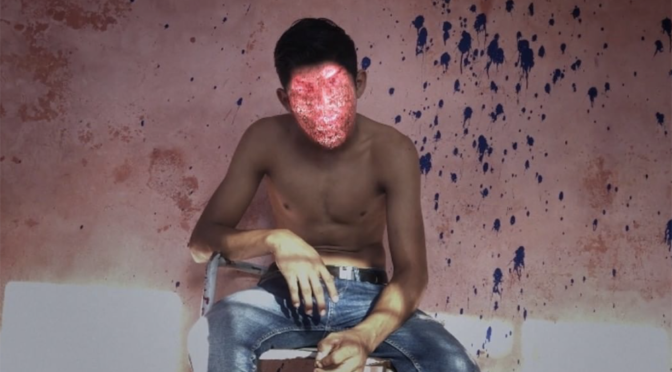 Los plebes, the documentary presented in TFF’s “The rooms of Rol” section, dives into the intimacy of young millennial sicarios who roam Sinaloa, Mexico, at the service of drug traffickers, showing their passions and hopes for the future. And, by dwelling on these budding assassins’ use of social media to recount their double lives, the story tries to question the media and offers a profound reflection on death.

The film begins and ends with sequences in vertical format, chilling images of shootings and brutal acts of violence that bluntly circumscribe the narrative. “You could film my face and get me in trouble” is the phrase that one of these sicarios says to the filmmaker Eduardo Giralt while he keeps the camera pointed at his feet so as not to film the face of the criminal. A phrase that underlines the danger of recording a face, in a film in which all the faces are hidden by a white mask in the case of civilians, and by a flame red one in the case of gangsters.

The only person who has a visible face is a romantic and nostalgic young man who dreams of getting out of the cartel, even though he is aware of the impossibility of seeing this desire become reality. He himself says that drug trafficking is a dead-end and the only way out is death. The boy has a puppy named Vago, a little Chihuahua mutt which, like his owner, believes he has someone to take care of him. Actually, the puppy has his fur covered in fleas and a belly full of worms, just as the young Mexican has a nose full of coke and lungs filled with hashish. Both believe they have someone to rely on but are unaware of what place they occupy in the hearts of their respective masters.

The film portrays a young generation unable to take care of itself as it is too busy trying to appear as more mature, in which reverberations of the glance of Harmony Korine and early Matteo Garrone intertwine with some lines of dialogue – spoken by nameless and faceless characters – with pulp tones, seemingly coming from the pages of Brett Easton Ellis or Aldo Nove. A documentary in which young people have fun acting like “big shots” with firearms, even though they are children who like to play with toy soldiers and still sleep with the plush face of Mickey Mouse hanging over the head of the bed.