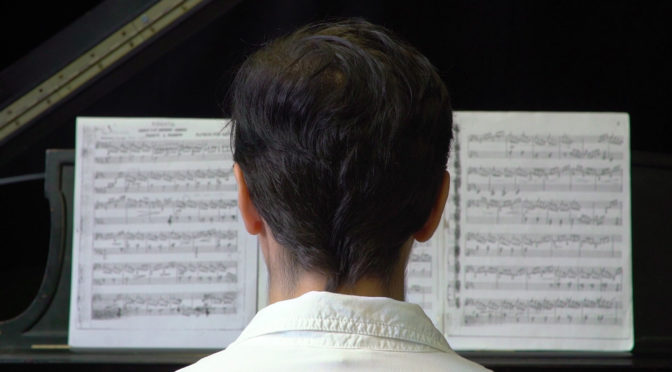 Piano Lessons is a moving experience, a whirling swirl of emotion, which finds in the documentary cinema its preferred medium to blow out. It is about the almost unknown story of German Diez Nieto, musician and virtuoso concert pianist, who abandoned the stage to devote himself exclusively to teaching music.

At the prestigious Steinway & Sons piano factory in New York, a piano concert is about to kick off, featuring some of the city’s most talented musicians. All of them have one unique feature in common that sets them apart from everyone else but, at the same time, bonds them together for life: they were all pupils of German Diez Nieto. Antongiulio Panizzi discreetly tells his story, while accompanying Francesca Khalifa (German Diez’s pupil, producer of the film and creator of the project) in her meetings with her colleagues. The music reveals a new world, painted by the artist Elena Ricci, whose animations intersperse the film: a world in black and white, evanescent and with undefined contours, where flashes of colour burst forth. A perfect metaphor for the pianist who, on a canvas made of ivory keys, paints the nuances of his music in black and white.

Piano Lessons recalls the life of a Maestro, before that of a pianist, through the eyes of his students. For German, teaching has always been, before anything else, an act of love: “he started playing for a very simple reason: because he liked listening to me” says, in a touching interview, his first teacher and brother Alfredo Diez Nieto, who was a child prodigy and musician for all his life.
Perhaps this is also why German, in his way of teaching, wanted his students to feel like part of a family. It is an extraordinary, almost unique case: the bond he created with his students, in stark contrast with the ruthless and extremely competitive environment that is usually portrayed. German created among his students a sense of community and belonging, a safe place where they could feel free to express themselves through their music.

Just as reluctant to perform as he is generous in his teachings, he receives back that love from the pianists who had been lucky enough to study alongside him. They feel it in every note, in every phrasing, in the physicality of their bodies. Thanks to the Maestro, they learned how to make those bodies vibrate. And, above all, they teach it to their students, handing down a musical legacy that from the great Franz Liszt came in direct line, from teacher to teacher, up to German Diez Nieto and that he, in turn, delivered into the safe hands of his musicians.