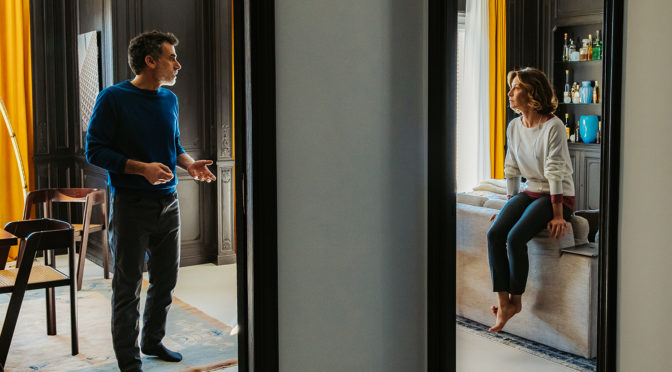 Presented out of competition at TFF39, “Quattordici giorni” is the fourth feature film directed by Ivan Cotroneo, an acknowledged Italian television author and screenwriter, who decided to turn into a movie one of his novels from 2020, co-written with Monica Rametta, who was also involved in the screenwriting of the movie.

Marta and Lorenzo have been married for twelve years and are forced to respect a fourteen-day quarantine at home because the former got in contact with a person who came out positive to Coronavirus. The situation seemed to be quite normal, except that the husband revealed to his wife about his affair and his intention to leave the house as soon as possible.

The plot is particularly original in intercepting the uncertainties of contemporary life and using them to tell the story of a marital crisis. The pandemic, a cumbersome elephant in the room, never becomes the main subject and never escapes the control of the two authors, so that it keeps being relegated to its intended functional role. Cotroneo focuses on a sort of “couple’s” cinema that has made a comeback at an international level (for example, think about Storia di un matrimonio and Malcolm & Marie), while finding its own stylistic way. The film is built around fast cuts, which set a constant and frenetic rhythm to the story and alternates very tight back shots with long shots in order to fully embrace the interior of the house: a limited microcosm, but at the same time rich enough to set the two protagonists free. Moreover, the Neapolitan director adopts an episodic structure: each day seems to be a day of its own, erasing the previous one, but that’s just because the camera is showing us only the peak of tension of each day that the couple is forced to spend together. It’s an hour-and-a-half-long “couple’s therapy”.

The film is also enjoyable thanks to the good performances of Carlotta Natoli and Thomas Trabacchi. The two actors build a credible couple dynamic, while bearing the weight of the film on their own and contributing with their actions, expressions and words to outline the history of the “inconvenient” character of Alessia, the mistress whom is never seen on stage, but that we feel like she’s hovering in every corner of the house, just like a ghost.

The sharp dialogues, full of references (from pop culture to the cinephile video library, from Martin Luther King to Gone With The Wind) do not prevent the film from stumbling into clichés and somewhat approximate gimmicks.  The feeling is that Cotroneo looks on the Anglo-Saxon school, but, while succeeding to make up for its shortcomings with a much more dynamic and unforcedly theatrical vision, he is also losing the thread when it actually becomes necessary to draw conclusions.