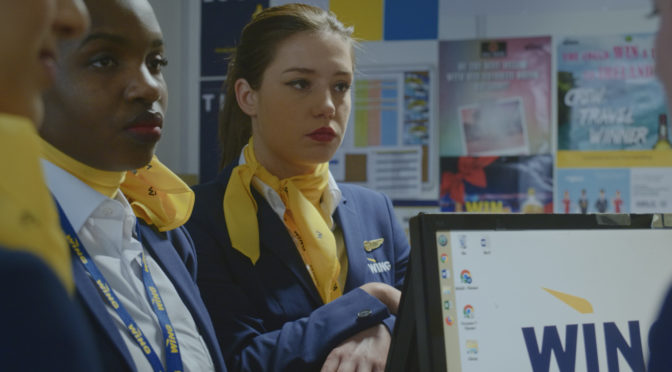 Julie Lecoustre and Emmanuel Marre present their first long feature film out of competition, a story that moves along a double track: the almost documentary-like representation of low-cost airline flight attendants and the main character’s introspective analysis, as she is unable to work through her grief.

Cassandre (Adèle Exarchopoulos) is a young flight attendant at Wing (a.k.a. Ryanair), constantly ready to efficiently deal with her job despite waking up at dawn, constantly flying all over Europe with an increasing pressure to sell perfumes during the flight. The typical frenetic nature of this job, in fact, is her daily escape from herself and from an unresolved trauma. The title (officially translated as “Zero fucks given“) effectively expresses the attitude with which Cassandre faces life in the air and in her free time: she has no strong ties with friends or colleagues, her acquaintances last as long as the interval between one stopover and the next and she hasn’t really put down roots anywhere.

However, her indifference never turns into cynicism or lack of interest; on the contrary, it becomes the guiding spirit that allows her to enjoy the present without too many worries. Her carelessness, after all, is a necessary mask to protect herself from herself; yet, a phone call to update her cell phone’s tariff plan is enough to uncover a still open wound, her mother’s death.

So the hidden side of the main character, the more sensitive and emotional one, begins to emerge and, at the same time, the filmmakers shed light on the behind-the-scenes activities of the airline: the training that includes heart massages performed in too tight uniforms, imperturbable smiles that must last thirty seconds and visual contacts that must show leadership are an example. Not surprisingly, it will be the excessive sensitivity and availability of Cassandre with a passenger to determine her termination.

The girl, then, suddenly returns home, where she discovers herself uncomfortable in a reality she has not experienced for a long time. There, explaining and defending her career and her personal outlook on life to friends and family, she becomes more and more reconciled with herself, atoning for the guilt that plagues her.

The French filmmaking duo shows the other side of that capitalism that makes services available 24/7 at ridiculously low prices and, at the same time, digs into the darkness of Cassandre’s tragedy as she tries to finally make peace with herself.