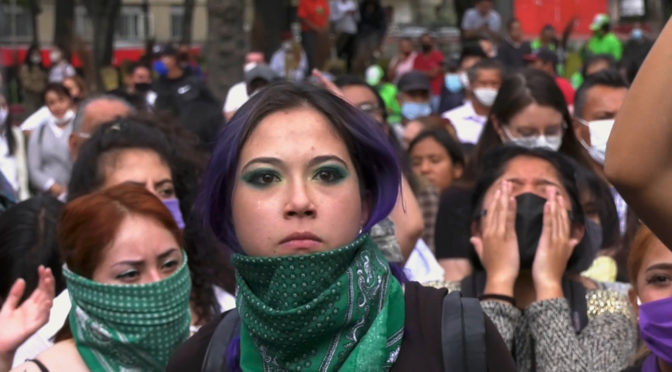 “Somos malas, podemos ser peores” We are evil, we can be even more evil.

The notes of a trumpet in the silence of a recording room seem to foretell the roar of an earthquake. This is how Dora Garcia’s documentary opens, almost concealing – albeit temporarily – the disruptive force of what it will be its main subject. Music is, indeed, the seed of this work, whose title is the Spanish translation of “Wenn ich mir was wünschen dürfte”, a song by the German composer Friedrich Holländer… if I could desire something. The delicate recording sessions alternate with the intense images of the feminist movement’s fights, which have overwhelmed Mexico City for five years. The disappointment and the unheard suffering of women have been going on for so long that the sadness, the vulnerability derived from abandonment have transformed in shield and sword at the same time. This is what the song communicates, echoing for the entire duration of the film.

Mexico, torn apart by femicides and continuous disappearings, is the centre of a global plague, of a social emergency which has to be narrated as the product of a centuries-old culture and not as the result of few, isolated cases. “Every minute of every week they kidnap our friends, they kill our sisters” sing the women of Mexico City, showing their green handkerchiefs in support of legal abortion or the colourful signs which symbolize, one by one, the rights they claim. The march is irrepressible, it permeates the city and then resolves itself into destruction: the only weapon these women have left in order to be heard. It is through union that the individual vulnerabilities interweave in a defence network which allows women and little girls to reclaim the street, a place so ordinary, and yet almost prohibited to the one who walks alone. And it is precisely to those lonely women that the chants are addressed: “You are not alone”, “If they touch one, we will all answer”, “Yes, I believe you”.

Dora Garcia skilfully builds the narration on two levels: on the one hand there is the idyllic music of La Bruja de Texcoco, whose identity is an absolute celebration of femininity, on the other hand there are the impetuous sounds of the fight, impetuous as the exhausted voices that fill up the streets, and the intense gazes, the bodies that are free to occupy space and to destroy in a way that does not befit young ladies. The frustration is palpable, the women’s chants seem to break through the screen, and yet it is like watching them scream without volume, since no one is listening.

The result is a hymn which is whispered and shouted at the same time, a bulky and loud hymn, a hymn that simply screams the right to exist as social actors, to exist as women, for all those who cannot do it anymore and for those who will come. Not one woman less. “I am Claudia, I am Esther and I am Teresa. I am Ingrid, I am Fabiola and I am Valeria”.