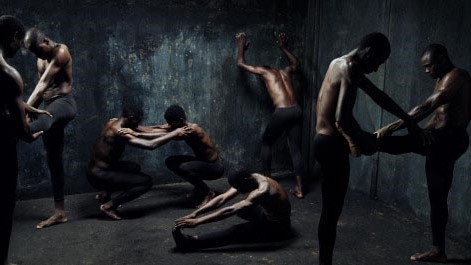 Premiered in the Encounters section of the last Berlinale, where it won the Special Jury Prize, Taste, the first feature film by Vietnamese director Lê Bao arrives at TFF39 in the Out-of-Competition/TFLAB section.

The almost dematerialised story is set in Ho Chi Minh City, Vietnam, and features Bassley (Olegunleko Ezekiel Gbenga), a former Nigerian footballer who loses his job following a leg injury. Together with four women (Thi Minh Nga Khuong, Thi Dung Le, Thi Cam Xuan Nguyen, Thi Tham Thin Vu) he takes refuge in a metaphysical and primordial dwelling where reality and surreality merge and the most common gestures are charged with symbolism and mute sacredness. In the case of Taste, it is impossible to speak of a narrative in classical terms, just as any attempt to define the characters risks being an over-interpretation. The narrative, the “classic” plot, exists but is only perceptible in its construction in the form of a vision, and the “characters” are placed within it like a simulacrum.

Lê Bao orchestrates his images like vivid mirages: the bodies inhabit the bare rooms of this mental dwelling according to a compositional principle, they are sculpted by light and seem to emerge from an archaic chiaroscuro. Bassley and the four women are chthonic figures, living in half-light and preserving an ancestral rituality: cooking, eating, washing and massaging are actions that are repeated as in a silent liturgy. Even sex transcends all human and animal traits to become a union of bodies and flesh.

The film is therefore able to create a dense environment of images in which the function of words – like that of the gaze, which is always placed elsewhere, towards an indecipherable reverse shot – is almost superfluous because it is reabsorbed into the naked bodies that are in themselves sentient matter. Moreover, it is precisely this material datum that informs and unifies the human physique – captured in its most toned form in the figure of Bassley and in the flaky, drooping bodies of the women – with that of the animal pig and the breathing balloon.

In this cavernous, dreamlike visual universe, the editing, like a delicate spine, has no other purpose than to hold the individual shots together. The poetic and imaginative density of Taste is thus all located in the prolonged time of the gaze: a slow tasting of appearances and sensations.